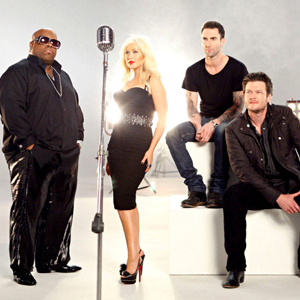 Yesterday I wrote about how I’d finally watched the premiere episode of The Voice, and that I enjoyed it enough to continue watching it. The show’s second episode, which aired last night, proved to be just as addictive.

In fact, I was only planning on watching the first hour of the two-hour episode before going to bed, but I got sucked in and stayed up for the whole thing. I wanted to see how the judges would flesh out their teams of eight, and the ending twist was great – eight singers got to return, singing new songs, to try and impress judges who still needed to fill slots.

With 32 people now in the competition, it’s impossible to know them all – I have a few favorites, but know them based on sight rather than by name. The one complaint I’ve heard about The Voice so far is that the talent hasn’t been outstanding, and that’s fair. American Idol has been mining the depths of talent in the US for ten years, and The Voice is a brand new show. They probably didn’t get the same droves of people begging to audition. But I do think we saw some pretty unique singers, and with such successful people guiding them through the process, I’m excited to see what we come up with.

Now that the coaches have their teams, the show shifts gears. Next week, we’ll see the singers compete two at a time, singing the same song, so that the coaches can select who will stay and who will go. I’m guessing we’ll get a couple of those episodes, as they’re only an hour long each. (And good! I’m glad they’re not going the Celebrity Apprentice route here and sticking with the two-hour format all season long.) That decision could be agonizing, so I’m looking forward to seeing how it pans out.

So my guess is that four people will go home each week – the singer with the lowest amount of votes from each team. (Though again, that’s just a guess.) Since we’ll go into these episodes with sixteen contestants, that means this portion of the show would probably only last about five weeks or so – which is fine. The downside is that I was looking forward to seeing if one judge would get decimated and have no singers left in the competition before everyone else. But I’m mean like that.

Do you think the show will maintain its appeal now that the blind audition episodes are finished? Are you looking forward to seeing more celebrity coaches and mentors, or do you think it’ll be too much?