The Voice was back on Tuesday night with the second of the battle episodes, and once again I was completely captivated. Unfortunately, the lame-o boxing ring was back, too. I hope they get rid of that before next season. 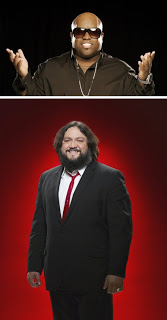 Cee-Lo’s Team
Tje Austin vs. Nakia – Closer
I was a little disappointed that Cee-Lo paired these guys together because I liked them both so much during the original audition rounds. I thought the song suited Tje more than Nakia, but Nakia might have a stronger voice. I honestly didn’t know who deserved to be chosen, or who Cee-Lo would choose.
Winner: Nakia
The other judges all seemed to really like Nakia, but there’s something about Tje that I really like. I think Monica put it best – his voice is very pleasant and melodic, and there’s just something really nice about it.Cee-Lo went with Nakia. This is the second time Cee-Lo has had a battle where I liked both singers a lot.

Blake’s Team
Elenowen vs. Jared Blake – Ain’t No Mountain High Enough
Why does Blake keep choosing lousy songs? What was with this song choice? Not only is it kind of karaoke, but it didn’t suit either Elenowen or Jared. I was curious to see what would happen when it was Elenowen’s turn to battle, since it would be different for a duo to participate. Jared Blake was an odd choice, since his style was pretty different from theirs. Even just watching the three step out on stage, they couldn’t have been more different and the song couldn’t have been a worse fit. I preferred Elenowen, just because their hipster, indie vibe better suits my tastes.
Winner: Jared Blake
Judging by the way things are shaping up, Blake’s team is not going to be my favorite. I’ll leave it at that. 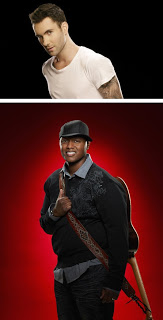 Adam’s Team
Javier Colon vs. Angela Wolff – Stand By Me
Adam picked a classic for this pair to sing, but at least it wasn’t a karaoke-ish song like Blake chose for his team. I really loved Javier in his original audition, and I thought Angela was just OK – it’s hard to cover Adele. I thought Angela sounded weak and a little nervous during the performance, but I loved Javier. I thought he won, hands down.
Winner: Javier Colon
Adam went with Javier, which was definitely the right choice. I’m looking forward to seeing what he’ll do in the next stage of the competition.

Christina’s Team
Beverly McLellan vs. Justin Grennan – Baba O’Reilly
I loved Christina’s song choice for this battle. Unfortunately, I didn’t enjoy the performance as much as I thought I would. Beverly had a big advantage in that she was way more comfortable with the song than Justin, and it showed in the performance.
Winner: Beverly McLellan
Christina chose Beverly, which seemed like the right choice. She out-sang Justin in the battle, and the woman can definitely blow. I’m just not sure how she’ll do once America starts voting.

What did you think of the episode? Of the four that moved on, I think Javier is my clear favorite. I’ve been enjoying the battle rounds and am looking forward to the next two weeks to see how the judges will pare down their teams. Until next time!