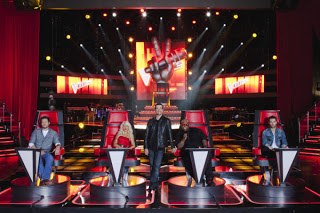 The Voice was back on NBC on Tuesday night, and I’ve gotta say, I’m really hooked on this show. I was seriously looking forward to the episode.

Before the eight performances, we had to find out which artists would move on from Cee-Lo and Adam’s teams. Team Cee-Lo was up first and, predictably, Vicci Martinez was voted through by America. That girl is a powerhouse singer, and should definitely be representing Team Cee-Lo in the finals. I guessed that Cee-Lo would bring Nakia along as well, and that’s what he did. Tori and Taylor are cute and all, but they don’t bring the same vocal strengths as Nakia. And that cowboy was just…no.

Next up was Team Adam. I wasn’t sure who America would vote through here – I like Casey best, but I thought middle America would like Jeff, and Javier is also very good. The only one I knew wouldn’t be moving on was poor little Devon. America chose Javier Colon, which was a solid choice, and I was really hoping Adam would choose Casey. I think she has a lot of untapped talent. I was surprised when Adam said he’d planned to save Jeff (sorry, Jeff) but I’m glad he changed his mind so we could see Casey sing again.

Frenchie Davis (Team Christina) – Like a Prayer
I thought this was a great song choice for Frenchie because the song is beautiful and can show off a vocal range but, frankly, Madonna isn’t much to compete with vocally. I thought Frenchie sounded great on the song, and did a fantastic job. It was fun, and she got to show off her amazing voice as well.

Nakia (Team Cee-Lo) – Whataya Want From Me
I don’t blame Nakia for not wanting to sing this song. I mean, Adam Lambert is kind of shrieky, and he wears eyeliner, and he has very little in common with a burly soul singer. But the arrangement of the song was fantastic, creative, and I loved the performance. This is exactly the kind of thing I always wanted to see more of on Idol, and Nakia definitely gave Vicci a run for her money.

Dia Frampton (Team Blake) – Losing My Religion
I really like Dia. I think she has a voice made for radio, that she’s adorable, and she seems very creative and cool. I really enjoyed this performance, more than I expected to. It seemed like she pushed herself more than last week, and it paid off. I don’t see how she couldn’t move on, especially considering her competition.

Casey Weston (Team Adam) – I Will Always Love You
I was surprised Adam and Casey went for this song, because the Whitney Houston version is much more well-known and not at all Casey’s vibe. This was the Dolly Parton rendition, which always reminds me of this. It was lovely, but I was worried it wouldn’t be enough to get Casey to the finals.

Beverly McClellan (Team Christina) – The Thrill Is Gone
I’m glad Christina and Beverly took this opportunity to show a different, less Melissa Etheridge-ey side to Beverly’s vocal abilities. I’m not sure that Beverly’s musical style when she’s off the show would exactly be my taste, but you can’t deny that the woman has a fantastic voice.

Javier Colon (Team Adam) – Fix You
I love this song, and I was glad Adam and Javier discussed sticking closer to the melody this time. Last week, I thought he oversang during his performance. I enjoyed this week’s performance infinitely more than I did his previous ones, and Javier made it very difficult to decide who should move on from Team Adam. Both Javier and Casey are so good!

Xenia (Team Blake) – The Man Who Can’t Be Moved
Xenia’s performance this week was stronger than her last, but I still don’t think she’s at the same level as her competition. I think Xenia seems very sweet and has a lovely voice, but I think she’s in over her head right now. She needs to spend a few years singing in coffee shops.

Vicci Martinez (Team Cee-Lo) – Dog Days Are Over
I love this song, and I have a feeling that Vicci might have won the whole damn competition with this performance. She’s consistently knocked my socks off, but this was on a whole new level. The singing was outstanding, and her confidence and showmanship were just unmatched. The drumming! The styling! The everything! It was like watching Adam Lambert on American Idol, only the singing was less annoying. I really, really loved it.

On another note, some of the judges performed during the show. I really liked the new Maroon 5 tune and will likely download it, and I loved that Christina came out and joined them. Blake’s music really isn’t my style, but I thought it was cute when Dia and Xenia came and joined him.

So, only four can continue on! I wish this show had a longer run, because I could totally stand to see only one person eliminated per week from here on out. There are several teams where I don’t want to lose anyone. Let’s run down ’em.

Team Christina: Frenchie Davis vs. Beverly McClellan
This is a tough one, because both women are incredibly talented but neither has become my favorite in the competition. I’m giving the edge to Beverly here.
Team Cee-Lo: Nakia vs. Vicci Martinez
I love Nakia and don’t want to see him go, but I don’t think this is even up for debate – Vicci is just hands down amazing.
Team Blake: Dia Frampton vs. Xenia
Again, I don’t think this one is up for debate. Dia is a much more experienced and confident performer and musician than Xenia, and she deserves to move on.
Team Adam: Casey Weston vs. Javier Colon
This one, for me, is the hardest. On Team Cee-Lo I love both contestants, but I love one more. With Adam’s team, I thoroughly enjoy both performers, don’t want to see either of them go home, but neither of them knocked it so far out of the park that it makes the decision easy. I guess I’ll go with Casey, but I’m happy to see both these guys perform again.

What did you think of the episode? Do you wish we were getting more of The Voice? Have these performances been at the same level as those on American Idol, or even better? And who do you want to see move on? Tell me in the comments!