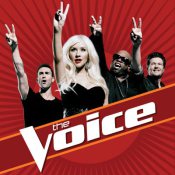 And then there were twelve! This was an interesting night. Many of my favorites didn’t perform as well as they have in previous weeks, yet when I look at all twelve performances tonight my favorites still remain – Matthew, Tessanne, Caroline, Will and Jacquie.

I fear that Cole and Austin are falling victim to Blake’s crappy song choices. Here’s what I thought of the performances:

Caroline singing “Wake Me Up” (Team Cee Lo)
It’s been well established that Caroline is one of my favorites. This wasn’t her best performance, but her bar is raised high. It was still a fun, sweet, youthful performance and I enjoyed it.

Josh singing “Man In The Mirror” (Team Christina)
Yeah… saving Josh was a mistake. I mean, this was fine. But Stephanie was COOL, and I definitely didn’t think this was cool. It was kind of like watching someone you work with do karaoke. I just don’t think Josh is at the same level as some other singers in the top 12.

James singing “Mr. Brightside” (Team Adam)
It was weird that he sat, right? During a rock-pop song? James was so good last week, but I kind of think that was a one-off. He’s been pretty inconsistent on the show, and I didn’t think this performance was one of his good ones.

Austin singing “It’s a Great Day To Be Alive” (Team Blake)
I knew it was only a matter of time before Blake started to assign country songs to his team members. Ugh. I didn’t know this song, and found the performance pretty boring. That’s too bad, since I otherwise enjoy Austin.

Jacquie singing “Love is Blindness” (Team Christina)
This is a U2 song that was covered by Jack White for The Great Gatsby, and it’s that vibe that made it perfect for Jacquie. I loved this performance – it wasn’t quite as amazing as her performance last week, but damn, this girl’s got talent.

Ray singing “All of Me” (Team Blake)
Ray is no John Legend, but I still thought this was pretty good. It was a very subdued and emotional performance, so it was too bad it had to follow Jacquie’s high energy song – but I thought he did a very good job.

Kat singing “Sail” (Team Cee Lo)
Kat has a great voice and a lot of confidence on stage. I certainly think she’s good, I just didn’t know this song and it didn’t really appeal to me. I think Kat will be around for a while though, she’s a fun rocker chick.

Jonny singing “Another Day In Paradise” (Team Cee Lo)
Jonny’s not my favorite, and this performance lost my interest pretty quickly. I felt that it was profoundly average. Fine, but this guy can’t stick around forever just because he’s a soldier.

Tessanne singing “My Kind of Love” (Team Adam)
I love this song, and I thought it was a great choice for Tessanne. She actually wasn’t quite as strong as I expected, but it was still easily one of the best performances of the night.

Matthew singing “Hallelujah” (Team Christina)
Easily, easily the best performance of the night. “Halleljuah” is way overdone on these shows, but Matthew’s rendition was so heartbreakingly beautiful that I could overlook that. He’s so freaking good. It’s insane.

Cole singing “Adorn” (Team Blake)
When I saw that Cole would be doing a song by R&B star Miguel, I assumed it would be a folky, acoustic guitar version. Instead, it was just kind of awkward. Cole was moving around the stage crooning, and it didn’t suit him at all. It was fine, but not what his strength is.

Will singing “Demons” (Team Adam)
Will got the pimp spot this week, so I had high expectations. But I actually thought it was one of Will’s weaker performances. It was still one of my favorites of the night because I like Will a lot, but he’s done better.

Rankings
No surprise, Team Christina and Team Adam are killing it. Plus, Caroline.