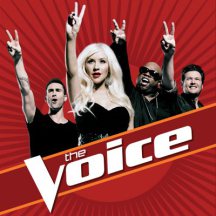 Top Ten time! This wasn’t my favorite week, guys. Last week, I wasn’t surprised or disappointed to see Josh and Jonny get eliminated. I like most of the top ten on this season of The Voice, but the song choices this week just weren’t for me.

Austin singing “Your Love” (Team Blake)
I enjoy Austin, but didn’t like this song and thought this was probably his weakest performance. It was rough around the end, and it wasn’t a good fit for him at all.

Jacquie singing “Clarity” (Team Christina)
I loved seeing Christina and little Jacquie do yoga together. You can tell how much Christina loves Jacquie and has a special connection with her. Jacquie had a rough start with “Clarity”, and the falsetto stuff wasn’t her best. But once she was belting it out, she sounded a lot better. I think Jacquie will only get better as she gets older. Overall, I thought it was a good performance.

Will singing “Love Me Again” (Team Adam)
A baby! Aww. That’s worth a couple votes. I like Will, and I really enjoyed the song. He sang it like he wrote it, and just really nailed the performance. It was fun.

Caroline singing “Leaving on a Jet Plane” (Team Cee Lo)
I didn’t love this song choice, which was a choice from Caroline. I mean… she sang it at camp. It probably should have stayed there. It’s just so cheesy, and even with Caroline’s beautiful voice I couldn’t get into it. She sang flawlessly though.

Cole singing “To Be With You” (Team Blake)
I enjoy Cole, very much. I wasn’t sure I’d dig this song, honestly only because the awful Westlife cover version from 2003 was played ALL OVER the radio when I was a teenager and I hated it. But I tried to push that from my head and enjoy Cole’s version.

Tessanne singing “If I Were Your Woman” (Team Adam)
Oh Tessanne. This might have been my favorite performance from her. It was perfect – strong and sassy and powerful and vulnerable. Tessanne looked, sounded and performed like a star. (And a shout-out to the props department. I always love the great stage shows The Voice does, and this was beautiful.)

Ray singing “You Are the Best Thing” (Team Blake)
Hmm. Ray LaMontagne has a deeper, more gravelly, soulful voice than this Ray. So here, I thought the song had too much of a wedding singer vibe. It was too smooth and disconnected, I felt like it lacked grit and emotion. It was too happy.

James singing “Without You” (Team Adam)
I think James has been pretty inconsistent so far. He’s had amazing weeks and terrible weeks. This is a practically impossible song, and I had NO idea how he’d do with it. I mean, Mariah Carey has covered this. James actually did pretty well. I think it was a stretch, but he did it.

Kat singing “We Belong” (Team Cee Lo)
Love Pat Benetar. I was definitely rooting for Kat here, and I liked the theatrics. Unfortunately, her voice was a little off in places. (Flat? I thought it sounded flat a lot.) Is it just me, or was it kind of boring? I had high hopes, and it was just kind of…yep. I wonder if she was distracted by the choreography, because I thought her vocals lacked her usual energy.

Matthew singing “Beneath Your Beautiful” (Team Christina)
I was not surprised that Matthew got the pimp spot this week. I loved that Christina also did yoga with Matthew. This was a good song choice for him following last week’s “Hallelujah”. It’s younger, more current, and romantic. Matthew started off a little shaky, like the song was too low for him. He was better on the chorus, and the rest of the song was fantastic. I wish the beginning had been smoother, but I still think this kid is a star.

This is hard – according to my rankings, Austin and Ray should be eliminated. And I guess that’s what I really do think – but I don’t hugely dislike them. I wish Jacquie had scored better this week, because she’s still one of my favorites. She and Caroline had crappy weeks, unfortunately. What did you guys think?