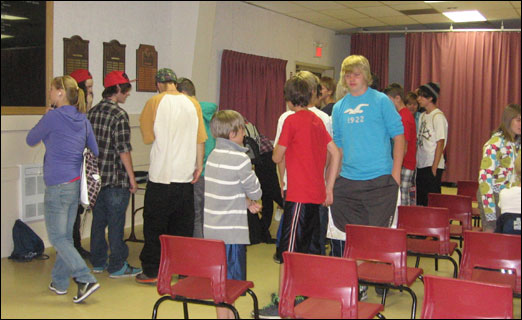 A group of youths eagerly lines up to sign their names on a sheet at the preliminary meeting to determine whether Bedford youths want a bike/skate park in town.

This was the message that came across at a preliminary meeting on Wednesday evening held to determine whether Bedford youths want a bike/skate park in town.

Community Recreation Co-ordinator Lana McMullen asked the crowd of about 40 youths and 15 adults “whether there is enough interest to A, sustain a park and B, enough to build one”.

In a show of hands, about 34 youths favoured a skatepark, as opposed to about seven who favoured a BMX bike park.

McMullen emphasized throughout the meeting that this is just the beginning of a very slow process. She stressed that this needs to be a youth initiative.

“Youth need to say to council, this is what youth want!”

Parents can support and become involved on the process, but the enthusiasm and push for this project needs to come from the youth themselves.

Once a formal skateboard park group is formed, with members such as a president and secretary, then “as a group we can start the process [to look at funding from provincial and youth initiatives],” said McMullen.

McMullen suggested there was no funding for a skatepark because it was never part of the city’s master plan.

However, Bedford Councillor Tim Outhit added some optimism to the meeting, promising “a commitment to try to make it happen.”

“I would like to see this done in my mandate,” he said. “We are not starting at zero.”

At the end of the meeting McMullen invited those present, in particular the youth, to sign a sheet to identify those interested in getting the wheels rolling.

The wheels are rolling on a new skatepark in Bedford
https://haligonia.ca/the-wheels-are-rolling-on-a-new-skatepark-in-bedford-5535/