Day 5 in NYC started off pretty much the same as ever, with the first thought in my head being bfast. We got ready for the day and headed down a few subway stops to 74th & B’way for some fantastic baked goods at Margot Patisserie ; a lovely little french bakery and one of Angela’s favorites. Once I decided that I would go with the cream cheese turnover, Angie got food envy and changed her order…which subsequently made me change MY order to another drool-inducing treat; an apple and walnut scone.

Angie’s turnover had a light and flaky, cloud-like texture of which I’ve grown quite fond! The interior was filled with a tangy cream cheese filling that moistened the inside and created a wonderful character contrast with the crisp exterior. 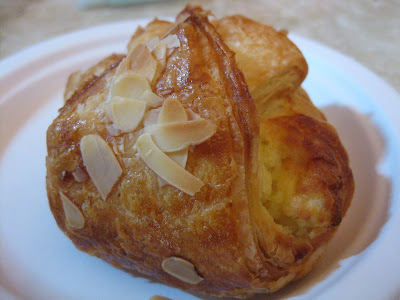 My sweet was equally delicious with chunks of sweet apple and crunchy walnuts studding the scone’s tender crumb. The sugar crust on top added not only a nice touch of sweetness to the scone, but a lovely crunch as well. 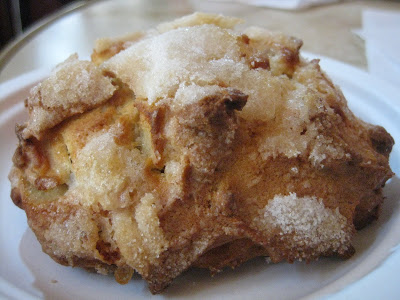 Once we had fulled up for the morning, we powershopped around the 70’s, making up for time lost from the previous day’s debauchery. After several hours of such rigorous activity, we had worked up a serious appetite 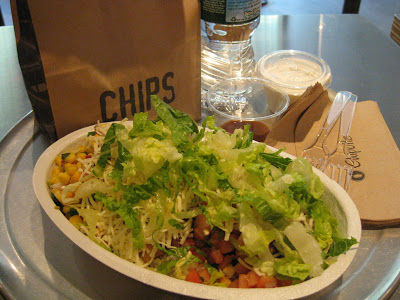 When we had finished our lunch and were ready to walk it off, we headed down a few blocks only to sit and laze again in the AC. What? It was 35 degrees and we needed some AC! Angie had the stellar idea to pop into Barnes & Noble and peruse the culinary section. She’s a smart one! I discovered a number of books that I’ve never seen in Hali bookstores, adding them all to my list of books to request from Halifax Public Libraries! I don’t buy books you see…I don’t have anywhere to keep them. God bless my local library for feeding my mind on a loaner basis.

Anyhow, on our way back uptown, we came across a little spot I like to call heaven; Jacques Torres Chocolatier. I’d been all over this website and had decided in advance to my trip that I would pick up a few truffles to sample. I had it all planned out; the Chai Tea truffle, the PB & J, the Champagne Kiss, to name a few… 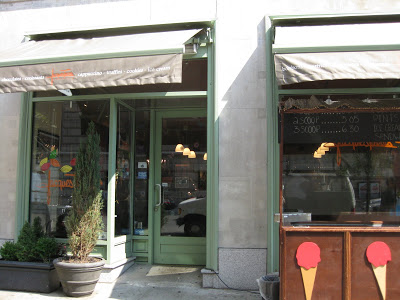 This plan when out the window when I arrived, however, and saw the in-freakin-credible chocolate chip cookies on display. Angie and I decided that these were too good to pass up, so we bought one to share. The icing on top was when the clerk asked if we wanted one that was fresh out of the oven. Um…hells yes! 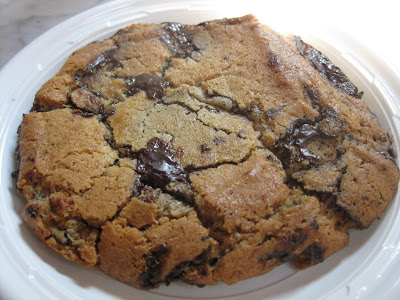 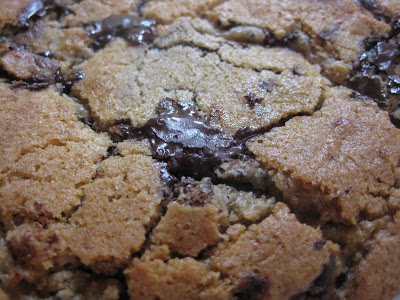 Aside from the rich cookie base, there was something interesting about the chocolate within this cookie as well. I’m constantly trying to figure out the ins and outs of recipes. I find those from restaurants particularly intriguing, deconstructing every flavour layer to figure out the secret method, or that mysterious spice; the secret of the Caramilk bar baffled me as a child. But this was different. What, besides the intense bittersweet chocolate, and delectable dough made this cookie so unique? Then I snapped this shot and I had my answer. Jacques Torres doesn’t use chocolate chips, nor chocolate chunks, but chocolate slabs, layering them one over the other like tectonic plates so that each bite contains a mouth-filling deposit of chocolate. 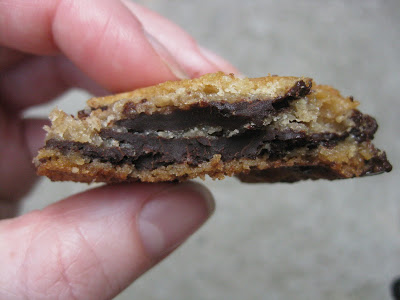 Once we had recovered from the shiver-inducing effect of that much chocolaty pleasure, we headed back uptown. We sat on the patio drinking Greyhounds- vodka and pink grapefruit juice- and played a game of Scrabble. Normally, this would not have made it into my blog, but my letters were so laughable that I had to take a photo! Clearly, I was not the winner of this match! 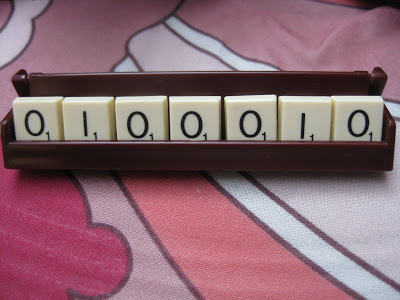 For supper, we decided to order in, and what an incredibly insightful decision that was! We got take-out from Indus Valley on B’way, cracked a bottle of red and threw on some Bill Evans jazz. If Angie had been an man, it would have been the perfect date night in NYC!! 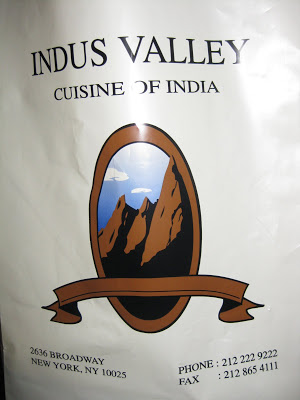 We decided to get a couple of dishes to split, and by a couple, I mean far too much food for two!! Angie let me choose a curry, while she went with a standby favorite; the Vegetarian Delight. This dish had a couple components; a mushroom, red bell pepper and potato stuffed with delicately spiced mixed veg and cream cheese and served with homemade peanut sauce. The red pepper was by far my fave. The stuffing mixture itself had almost a minced consistency, and the cream cheese added depth and tang. 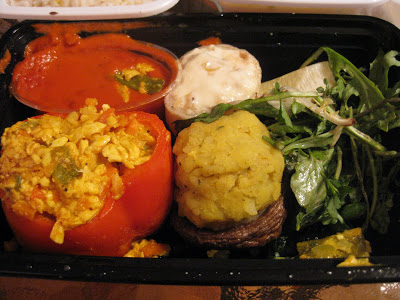 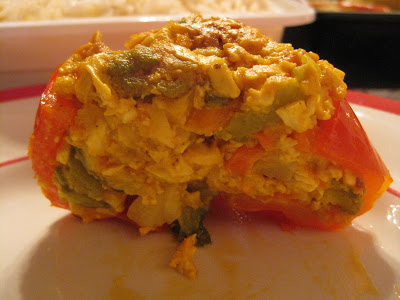 We also shared the Dal Taka; yellow lentils cooked with tomatoes and seasoned with a plethora of spices including green chillies, ginger, garlic, turmeric, red chili powder, coriander powder, cumin and mustard seeds. Served with a Jasmine rice, this mild, yet flavorful curry also came with nice chunks of zucchini and eggplant. 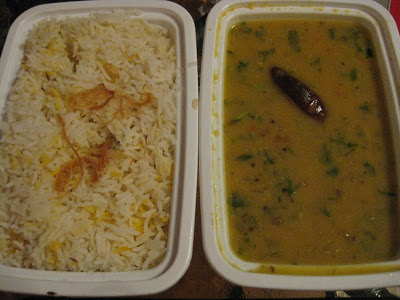 And how could you get Indian food w/out an order of naan? We upped the ante a notch with the Paneer Kulcha; whole wheat bread stuffed with homemade cottage cheese. This stuff would beat garlic cheese bread any day of the week! 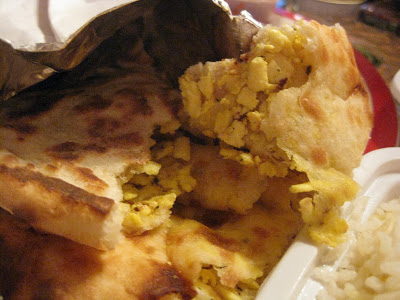 And, yet, there’s more. I have an affinity for the crisp-crunch of Pappadams, so we got an order of those, which came with three dipping sauces: red pepper chutney, cilantro puree and pomegranate molasses. 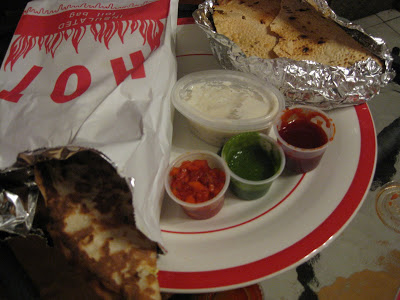 And so ended another great day in NYC. As darkness fell, I had that crappy trip revelation that tomorrow would be my last day to hang with sis, eat good food and take in this amazing city before I had to get back to real life. But we still had one more day to go, and I’d had 5 great days already, so I counted my blessings, gritted my teeth, and tried to make a word with 7 vowels.