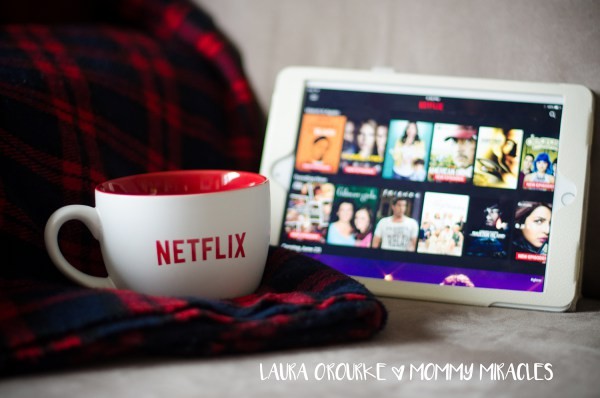 (psssst: I have to tell you that this post is sponsored by Netflix. But don’t let that make you click away. Because I need your suggestions. And also, I have something you can win… So, stick around, would ya?)

If you haven’t noticed yet, we’re in a new season. I mean, I guess it should have become clear to me as I started to dress my kids in shorts and began to juggle window and floor fans throughout the house to get maximum airflow and oh my goodness, I guess I need to put on sunscreen every day, (I say, after my third sunburn.)

Summer season is here and I am in crisis mode.

But, I’m not talking about the season outside my window. I’m talking about the only substantial seasonality that lives within my Internet world: Television seasons. More specifically, THERE IS NOTHING TO WATCH.

Confession: I love television. DVR was probably the fourth best thing to ever happen to me. (Don’t think too much about what was first, second, and third, because I didn’t. Just know that it was high up there). But cable was such a ridiculous and unnecessary expense that we cut it. And I’m fine, really. I swear. This cold sweat is just from the outside heat and the inside fan pointed directly at me.

With Internet streaming, my television viewing options have expanded, but my television viewing habits have changed. I no longer really watch shows with people. Dan and I are still only 3 episodes into The OA which I think is one episode further than the last time I blogged about it months ago. No, for me, TV is a solitary activity, watched on the iPad, and best enjoyed when cooking or cleaning or doing the dishes or folding the laundry.

I can watch hours of television in a day but if I am using it to keep my mind occupied while doing chores then finishing my chores offers an easy trigger point to tell me when to turn off the show. Otherwise, I’ve learned how easy it is for me to binge-watch and do nothing, an act that pulls me right back to bed and into a bad mental health place. Am I alone in this? I would love to see the stats on whether this is a trend that started around the time of portable non-stop access to any and every entertainment thing.

For this reason, I avoid binge-watching. “Bingeing” is such a trendy word in our Netflix world, but I’m realizing the negative effects are still just as real for me as bingeing anything else would be. If possible, I watch shows on their respective network apps the week after they air to keep me accountable. One at a time. I can stop whenever.

I’ve read some articles about how Netflix prefers to release episodes all at once, but I’ve got to say, I appreciate so much when they release episodes weekly. There are a few shows they do this with. Some of my favourite shows are on Netflix and holy moly once I get going I can’t stop. (Hello, Unbreakable Kimmy Schmidt and your absolute best theme song in the history of the world.) I mean, it was so great to spread out my Jane the Virgin viewing over the last few months. I’d log on and BOOM, there was another and my day would be made!

But summer is here and nothing new is really coming on to keep me occupied while cleaning. (I mean, did you hear about Bachelor in Paradise? NOTHING ABOUT THAT IS OK WITH ME!*) So it is time for me to get bingeing again… I mean, it is time for me to start responsibly watching a season of television without any limits other than those I set for myself. I’ll be fine. I’ve recently caught up on Riverdale (OMGoodness!), Grace & Frankie, Degrassi: Next Class, Master of None, and The Mindy Project. I clearly enjoy my television shows to be on the lighter side. But I need something new because it seems like it is just you and I and a dishwasher full of clean dishes this summer, Netflix.

So hit me with your Netflix suggestions! And tell me, can you watch just one? When do you indulge in Netflix bingeing?

This post was inspired by Netflix. I am a member of the Netflix Stream Team and as such, I have been compensated for this post with a complimentary Netflix subscription and a few other perks. I’m honoured to have been a StreamTeam member for the last four years. The stories and opinions are all my own.

Want a chance to win a 3 month Netflix subscription for you & a friend? Comment by tagging your unicorn friend who doesn’t have Netflix yet! #partner #StreamTeam (ends June 30, Canada only please!) While you’re at it, stop by my blog super soon to give me a suggestion on what to binge watch next! (Link in description)

The post The Worst Season appeared first on Mommy Miracles.