“To the last man, goddammit, to the last man! They were not going to get us.”
– Lt. Gen. Romeo Dallaire (RET)

It is very rare that a person gets to meet someone they truly admire let alone someone that they would call “a hero”. As of last Friday I became one of those fortunate enough to do so. Following the end of the Second World War, many called for a new approach to international relations and the creation of codified universal human rights. Having witnessed two horrific worldwide conflicts, the birth of a global ideological rivalry, increasing turmoil in developing regions and another potential war brewing along the Suez Canal, a Canadian stepped up to put this new liberal internationalist theory into practice. For his efforts, Lester Pearson, received the Nobel Prize and Canadian foreign policy received a new ethos; Peacekeeping, international development and humanitarian intervention. With the exception of a notable scandal (*cough* Somalia and the Airborne *cough*) we held true to this…..until 1994, when Canada towed the US dominated Western line and refused to support the castrated UN mission in Rwanda. Even as Canadian military personnel were being attacked, their desperate pleas for assistance were ignored. UNAMIR had been sent into the heart of Africa with no practical support and even less moral backing. Set adrift in a sea of blood and constantly undercut by the most powerful nations in the world, they nonetheless tried their damnedest to save as many lives as possible. Their mission barely held together by a gruff, soft-spoken Lieutenant-General from Montreal 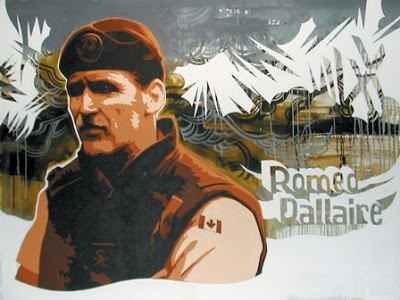 Though outwardly he was every inch the pragmatic military man, at his heart Dallaire was a diehard believer in not only the mission but the political philosophy which had given birth to it. A true believer, his faith that the UN and the world at large would ultimately do the right thing was rewarded with the cruelest betrayal imaginable. Abandoned by his superiors and his national government, he endured until the madness was finally ended by the RPF, who swept the Hutu extremists from power. Enraged, disillusioned and exhausted, he was relieved of his command and returned home to Canada where he received promotion after promotion from a deeply embarrassed Canadian government. For his efforts, Dallaire paid a terrible price. PTSD, suicidal depression and ultimately substance abuse crippled this once imposing military man. Ultimately he attempted suicide and was famously found half dead on a park bench in Ottawa. Blaming himself for the deaths under his watch he was unable to bear the pain any longer.

But he survived and after years of painful recovery (a process which continues to this day) General Dallaire had found himself a new mission. To ensure that no one every forgot the horror and the failures of the Rwandan Genocide. He wrote a book, Shake Hands With The Devil and participated in a similarly named documentary where he returned to Rwanda for the first time since he left. Both chronicled the events which lead to the titanic failure of UNAMIR and the madness he witnessed on a daily basis. One part therapy, two parts rebuke, Dallaire had re-emerged as a champion of the humanitarian interventionist ideals which the UN had abandoned. Today, Dallaire is a Liberal Senator, award winning author, outspoken critic of the global community’s failure to unreservedly aid a troubled Africa and a tireless campaigner for human rights, justice and development. Most notably he has become a vocal proponent for serious intervention in Darfur, yet another African genocide during the which the UN has once again dithered. To Canadians today Senator Dallaire is universally respected and rightly hailed, but he also serves as a living reminder of our previous and on going failures. The promise of our nation as of yet unfulfilled…

“I used to call him my Canadian hero, I still call him that. He’d say don’t call me that! I’m no hero”
– Elizabeth Dallaire

I was only eight years old when the Genocide occurred but I lived in a house where CBC radio was constantly blaring. I grew up listening to shows like As It Happens and I can still remember hearing some of the numerous conversations between host Michael Enright and Dallaire, who was broadcasting live from the UN compound in Kigali, even as mortars could be heard thumping in the background. As such he was well respected by all the members of my family, a family where shouting matches about politics are frequent and intense. Since then Dallaire has remained a fixture of my surprisingly limited pantheon of heroes alongside Pierre Trudeau, Joseph Howe, Lester Pearson, Gandhi, my parents and somewhat embarrassingly, William Shatner (that four of the eight are Montrealers is surely coincidental). I respect his tenacity, his dedication and ultimately his to strength to endure what could only be described as utter hell on Earth. Despite his protestations, the man deserves to be acknowledged as one of the finest humanitarians of the modern age. A rare champion of human equality and dignity. Last year, the retired general came to Halifax, to speak about the tragedy unfolding in Darfur. Unfortunately I failed to learn about this until a day after his talk. So when a second opportunity to hear him speak presented itself, I would be damned if I was going to let it slip through my fingers. I bought my fifteen dollar ticket (all of which went to charity mind you) three weeks early and last Thursday I bundled into the packed Rebecca Cohn at 9am, eagerly awaiting the arrival of the burly Quebecois soldier. He didn’t disappoint. He spoke clearly and with a noticeable energy most likely springing from his passion for the cause. Mixing humourous anecdotes, horrendous first hand accounts, the occasional french witticism and frankness he delivered a message aimed directly at the mostly young, thousand strong audience. He urged us, the most powerful voting bloc in the country to (apparently 18-35 year olds compose 35% of the voting population but only 15% of this bloc votes) disregard our apathy and take a more direct role in not only changing government foreign policy but our attitudes towards development as well. He even encouraged us to either hijack the existing parties by joining them in large numbers or create a new one. I left the speech, inspired and amazingly, slightly less cynical about Canadian politics.. Slightly. His speech was so interesting that I actually, and this is kind of embarrassing to admit, took notes. The highlight for me was that I actually got to speak to the man, being one of only two audience members who got to ask a question. And the other one was a student activist who used the opportunity not ask a question but to plug her organization (a group called STAND for those who are interested). It was a thoroughly rewarding experience and I would encourage anyone with the opportunity to here him speak, whether or not you agree with his politics, do so!

There Goes My Hero
https://haligonia.ca/there-goes-my-hero-1198/