Longtime readers of this blog will know that East Coast By Choice is mostly about sharing positive stories. I save most of my whining for other channels both offline and online. That said, I’m breaking from that trend because the thing that hurts me the most in this city is breaking me. Maybe it’s just this time of year. Maybe I’ve got Seasonal Affective Disorder. But I’m certain I’m not alone. What’s the big deal, you might ask? It’s the city of Halifax’s lack of regard for pedestrians. 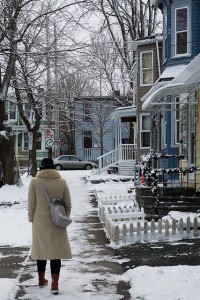 Yesterday, I left the house to happily head to the second day of my new job. Here’s the thing: I have to walk about 10 minutes from my drop-off point to get into work. None of the sidewalks were even remotely safe due to ice. Not a lick of salt or sand to be seen. The truth of the matter is, on a winter’s day, my regular bus stop is a treacherous icy slope threatening to glide me into oncoming traffic as I brace myself (unsheltered) against the wind. Thanks to the combination of all these conditions and the fact that I basically had to look like I was heading into work at the Ministry of Silly Walks, I made it into the office late. On my second day of the new job.

If only my story stopped there. Trying to get home has been another story altogether. Although there’s one bus stop in front of the office, the bus route doesn’t take me anywhere near home. So I have at least a 5-10 minute walk to get to one that does. However, that stop only services one bus that if I miss means I have to wait an additional 30 minutes. Foolishly following the advice of Google Maps on my iPhone (a service that has not failed me before) I decided to walk to another stop seemingly slightly further.

I finally could cross the road to a spot with an actual sidewalk. Of course, as fortune would have it, the bus flew by me before the light could change and I almost missed another bus that I had to transfer off of to finally get home. And I did eventually make it home. Ironically, although I left work slightly earlier than I did when working downtown at the CBC, I got home at the same time I used to.

The truth of the matter is that I’ve specifically not applied to certain jobs based solely on their locations within the city. Dartmouth? Forget about it. As someone who relies on public transit it is completely unrealistic for me to make that kind of commute. I might as well be still living in Toronto. This little conundrum I’ve found myself in is unexpected but I’m certain I’ll be able to work it out with some good timing and patience.

This is all to say that I hate public transit in this city. And I hate how the city gets away with not adequately servicing their public spaces like bus stops and sidewalks yet fines homeowners for failing to do the same.

But I love my new job.

These boots were made for walking (but not in HRM)
https://haligonia.ca/these-boots-were-made-for-walking-but-not-in-hrm-33981/