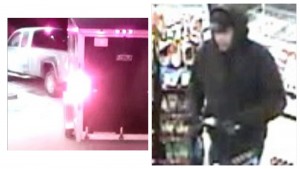 Thieves used a stolen truck and trailer to steal cigarettes from a store in Wentworth. 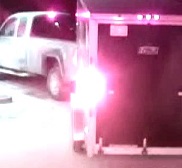 Just before 3 a.m. on December 28, thieves broke in to a store in Wentworth and stole an undetermined amount of cigarettes. The suspects were observed leaving in two vehicles, one of which was a Chev truck hauling a black, enclosed dual axel trailer with a company name on side of it. The second vehicle was described as a cross over SUV or a car. The suspect vehicles departed travelling west on Highway 4.

A short time later, the suspect vehicle hauling the trailer was observed in the Oxford area. The investigation has determined that the truck and trailer were stolen in two separate incidents in the Halifax area that same night.

RCMP is asking for the public’s assistance with identifying one of the suspects. If you have anyinformation about this break and enter, or the vehicle thefts, you are asked to contact the Oxford RCMP Detachment at 902-447-2525. Should you wish to remain anonymous, you can also contact Nova Scotia Crime Stoppers at 1-800-222-TIPS (8477) or text TIP202 + your message to ‘CRIMES’ (274637) or submit tips by Secure Web Tips at www.crimestoppers.ns.ca. Calls to Crime Stoppers are not taped or traced and if police make an arrest and lay charges based on a tip, callers qualify for a cash award.

Thieves use stolen truck and trailer to steal cigarettes
https://haligonia.ca/thieves-use-stolen-truck-and-trailer-to-steal-cigarettes-221420/