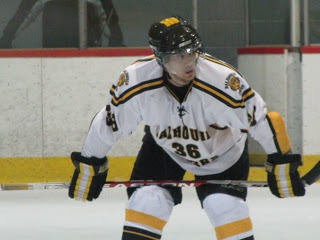 In a press conference this afternoon at the Nova Scotia Hall of Fame, the Dalhousie Tiger’s men’s and women’s hockey teams introduced new recruits for the 2010-11 varsity season and announced several partnership initiatives with the HRM community and Dalhousie alumni.

Dalhousie Athletics Director John Macdonald began the conference with a quick speech before giving way to Lesley Jordan, the Head Coach of the Women’s team. Jordan introduced several recruits including three who played in the PWHL last season; Goaltender Zoe Zivolac of the Hamilton Hawks; Meaghan O’Neill of the Oakville Ice; and Rebecca Smyth of the Stoney Creek Sabres.

“We think we have a fast paced, hard working group of athletes and we expect to be in the hunt for the AUS championship,” said Jordan in her closing comments.

Next up was Men’s Coach Pete Belliveau, who began his address by reminding the media and dignitaries assembled that AUS Men’s Hockey was “the best hockey in Atlantic Canada.”

Belliveau went on to list the team’s progress in 2009/10, which included an 11 point jump in the standings, and being the second most improved team in Canada.

The third year coach announced his recruiting class beginning with the headliner, Pierre-Alexandre Vandall. Vandall was a high scoring forward in the QMJHL for the Shawinigan Cataractes. Joining Vandall in the forward corps is Patrick Daley and Brett Theberge, who stared last season for the Peterborough Petes of the OHL.

Belliveau was realistic in his assessment of his team chances this season in the highly competitive AUS. “We think we turned the corner last year….we feel that we’ll be middle of the pack this season and competitive every night. We’ve added a great deal of speed, skill, and size.”

Master of Ceremonies and Tiger’s assistant coach, Paul Boutillier, then announced a partnership with the Dalhousie Tigers alumni that will see the athletics department set aside designated nights on the men’s hockey schedule to honor past players and teams.

The Decade Chairs initiative will pay tribute to players from four different decades. The first event is seventies night on October 15.

The program will attempt to get more African Canadian youth in the HRM to participate in hockey and learn basic skills. Tiger’s players will help serve as mentors for participants and assist HNS coaches in teaching skills during designated practice times.

The press conference closed with a tribute to Jim Bottomly, the Tiger’s living legend who now coaches the Bridgewater Lumberjacks of the MJHL.