Even the smallest of things have their stories, and more and more those stories are being told in book form. Science and technical histories are popular these days, and its not just the big things—planets, inventions, social movements—that make for essential reading. Here are a few books on some of the tiniest of topics, that may prove immensely entertaining.
Dust: a history of the small and invisible (M)
by Joseph Amato.

From the publisher: “With Dust, Joseph Amato enthralls the reader with the first history of the small and the invisible. Dust is a poetic meditation on how dust has been experienced and the small has been imagined across the ages. Examining a thousand years of Western civilization—from the naturalism of medieval philosophy, to the artistry of the Renaissance, to the scientific and industrial revolutions, to the modern worlds of nanotechnology and viral diseases—Dust offers a savvy story of the genesis of the microcosm.” Can’t get enough dust? The Secret Life of Dust: from the cosmos to the kitchen counter, the big consequences of little things (M) by Hannah Holmes may also interest you.
Collider: the search for the world’s smallest particles (M)
by Paul Halpern.

What is the Large Hadron Collider and what are scientists doing with it? Physicist Halpern brings the theory out of the realm of the folks with PhDs to explain to the average interested person what may be achieved through this immense project. The project itself might be big, but the things being examined are beyond tiny. Publishers Weekly said “Halpern makes the search for mysterious particles pertinent and exciting by explaining clearly what we don’t know about the universe, and offering a hopeful outlook for future research.” 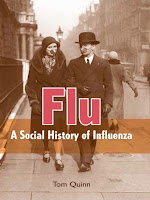 Flu: a social history of influenza (M)
by Tom Quinn.
This may be the perfect season to read this title: if you’re curled up at home with a fever, perhaps this history of the virus that afflicts you will be the cure. Flu virus in itself is microscopic, but its impact on humans has been huge. This book brings in some details the Spanish Flu Epidemic of 1918, but on the whole is a history of the flu in general.

On the Dot: the speck that changed the world (M)
by Alexander and Nicholas D. Humez.
F

rom the library catalogue: “Despite the humble origins of its name, the dot has been one of the most versatile players in the history of written communication. The Humez brothers shed light on the dot in all its various forms–as a mark of punctuation and a notation in mathematics and music–take readers on an engaging tour of the highways and byways of language, ranging from the history of the question mark and its lesser known offshoots the point d’ironie and the interrobang, to acronyms and backronyms, power point bullets and asterisks, emoticons and the “at-sign.””

Salt: a world history (M)
by Mark Kurlansky.
Technically, I guess, salt isn’t tiny, however in the form that most of us encounter it—table salt—it’s pretty darn small. Kurlansky is a big name in the world of microhistory—books that tell the history of very specific things—and salt has played more of a role in the history of man than you might expect. Fascinating reading.
The Dance of the Molecules: how nanotechnology is changing our lives (M)
by Ted Sargent.

Google dictionary tells me that Nanotechnology is “The branch of technology that deals with dimensions and tolerances of less than 100 nanometers, esp. the manipulation of individual atoms and molecules.” Sounds pretty small! Sargent’s book looks at the myriad ways that this growing technology is and will be impacting human life.