Home / Life / Couchtime With Jill / To Glee With Love: A Season One Wrap-Up (Part II) 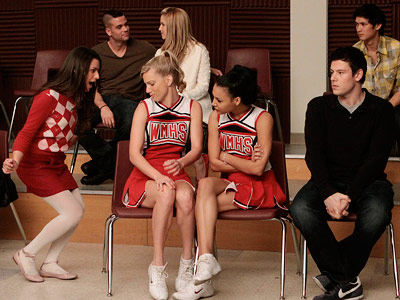 To Glee With Love: A Season One Wrap-Up (Part II)

Share
Oh, the back nine. So up and down. So controversial. The problem with Glee after their long hiatus was that everyone had put the show on the “groundbreaking” pedestal. It was expected to be funny, dramatic, fashionable, musical, cutting edge and people-pleasing. And it was all of those things, but not all at the same time. Some people loved the Madonna episode. Others didn’t. Some people loved the Gaga episode. Others didn’t. As I said in my season finale recap, saying an episode of Glee is bad is like saying “This cupcake is bad”. Chances are I’ll still devour it and lick the icing off my fingers. Because it is a cupcake. So a bad episode of Glee, by my definition, is still pretty damn entertaining. Because it’s Glee. That’s just the deal. But let’s look at the back nine (Check out this previous post for a wrap-up of the first thirteen episodes) and discuss what worked and what didn’t. 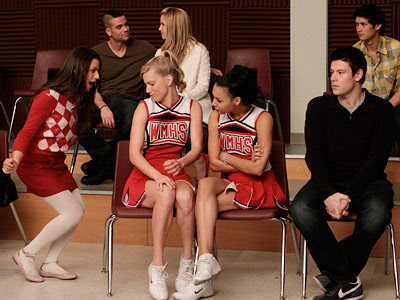 Glee came back with a bang with Hell-O, and it wasn’t well-received by all. I thought it had some good moments. Things had developed since we last saw the glee kids. Sue Sylvester had returned from her condo in Boca and was blackmailing Figgins with an incriminating photo. Schue had left Terri and was ready to woo Emma. Rachel and Finn were together. Quinn was living with Puck. Personally, my favorite part of this episode was the increased presence of Brittany and Santana. This was the episode where Brittany said one of my all-time favorite lines “Did you know that dolphins are just gay sharks?”. And Rachel’s scorned-lover rendition of “Gives You Hell” has been played many a time on my iPod. We also met Idina Menzel’s character, Vocal Adrenaline coach Shelby. 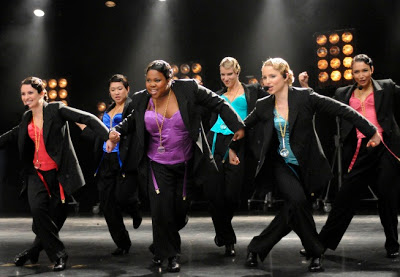 The second episode back was the long-awaited The Power of Madonna, which I think was a smashing success. I don’t want to see a lot of episodes devoted to one artist, but just this once I thought it worked. There were so many great things – the amazing version of “Like a Virgin” that was intercut with shots of Finn & Santana, Rachel & Jesse and Will & Emma about to have sex for the first time. Sue Syvester’s “Vogue” video. The one thing I didn’t love about this episode was Jesse’s arrival at McKinley High. The whole Jesse/Rachel/Finn love triangle felt sloppy and underdeveloped. 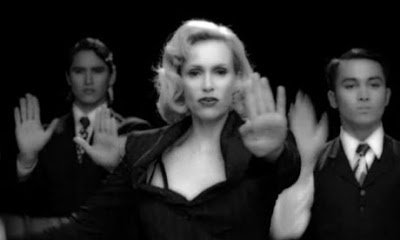 I thought Home was the perfect follow-up to the over-the-top, somewhat gimmicky Madonna episode. It was simple and heartfelt. We got to see more of April Rhodes, and she was hilariously excited about Will’s recent split with Terri. We got to see the friendship between Quinn and Mercedes develop, and that resulted in Mercedes bringing down the house with a cover of “Beautiful” at a Cheerios performance. And, we saw the start of what was one of my favorite plot lines in the back nine – Finn and Kurt struggling with the new romance between their parents. The following episode though, Bad Reputation, was one of the weakest of the season. This episode completely dropped the stories I liked the best, like Kurt’s struggles with Finn and Quinn’s friendship with Mercedes, and the musical performances were not the best. Furthermore, the storyline of Sue Sylvester remaking “Physical” was ridiculous, and a guest appearance by Molly Shannon added nothing to the episode. The episode gained points at the end because of Rachel’s hilarious “Run Joey Run” video and the final performance of “Total Eclipse of the Heart“.

I heard some criticisms of the following episode, Laryngitis, but I really liked it. I love anything that heavily features Kurt, and some fantastically idiotic Brittany lines made the episode even better. The episode also provided some of my favorite musical numbers from the back nine – Puck performing “The Lady is a Tramp” in an attempt to woo Mercedes had me swooning, and Mercedes and Santana’s aggressive cover of “The Boy is Mine” played right to my 1990s-pop-loving heart. 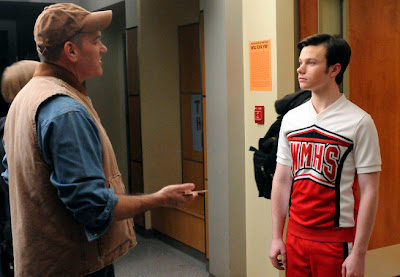 Watching Kurt attempt to impress his dad by playing straight was both funny and heartbreaking. He tried dating Brittany and covering Mellencamp. Finally, Kurt expressed his jealousy for his dad’s budding friendship with Finn through a stellar performance of “Rose’s Turn“. “Everything is coming up Kurt” is right – he stole the show. It almost helped me overlook the weak Rachel-has-laryngitis storyline and the brief introduction of a character even more paralyzed than Artie. 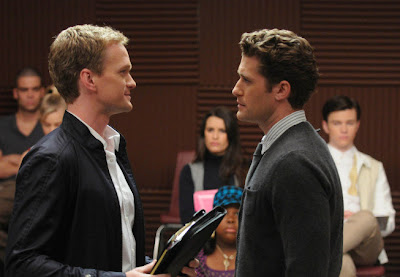 Dream On, the nineteenth episode of the season, was definitely a favorite of mine. I love Neil Patrick Harris and he was perfect as Will’s old glee club nemesis. As Bryan Ryan, NPH had some hilarious interactions with Sue Sylvester and some fantastic duets with Will Schuester. I didn’t even mind Jesse in this episode, as he began to help Rachel find her birth mother – who we, the viewers, discovered was Vocal Adrenaline coach Shelby. Idina Menzel and Lea Michele look so much alike, it would have been impossible not to go there. The episode also had an emotional story as we were taken deeper into Artie’s struggles with being in a wheelchair. His version of “The Safety Dance” was a great fantasy sequence and “Dream a Little Dream of Me” was a sweet, simple way to end the episode. 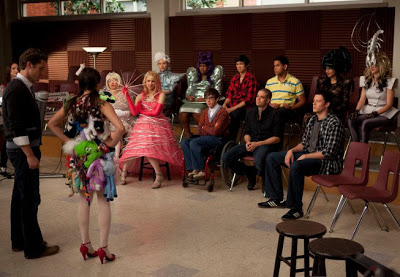 Theatricality, the Gaga episode, was a controversial one. I thought it had good aspects and weak aspects. I liked that the episode didn’t only feature Lady Gaga songs, and I loved watching the glee kids spend the whole episode in outlandish Gaga costumes. Come on, you know you laughed when one of those poor stuffed animals fell off Rachel’s costume. Puck’s performance of “Beth” really stood out for me, as did Kurt and the ladies’ performance of “Bad Romance“.

Overall, there was one major high and one major low for me in the episode. The high: everything involved Kurt, Finn and Kurt’s dad. After Finn blew up at the lavishly decorated room he was supposed to share with Kurt, Burt Hummel overheard Finn describe some of the decor as “faggy”. It was hard to watch, knowing that Finn is a good kid inside but was in the wrong. The scenes were great, and in the end Finn stuck up for Kurt against some football guys who were bullying him. The low was the awkward scenes between Rachel and Shelby, once she found out that Shelby was really her mom. Why would Shelby turn away from Rachel so quickly after seeking her out? It felt rushed and awkward. And I’m still on the fence about that “Poker Face” cover – it was a cool arrangement, but a weird choice for a mother-daughter duet. 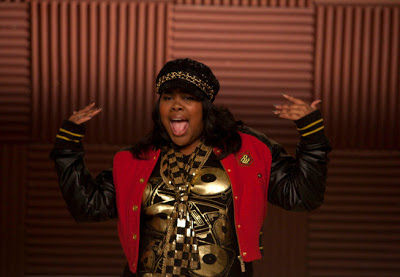 The second-last episode of the season, Funk, was probably the worst of the season. Although a few early episodes of the premiere felt like they could use some work, this episode just felt like one giant miss. The story involving Rachel and Jesse was sloppy, underdeveloped and left viewers confused. Will’s fake seduction of Sue was weird, though occasionally funny. Of course I’m going to laugh at Sue wearing pearls with her tracksuit for a date. And, with a couple exceptions, the songs weren’t great. I did like Puck, Finn and the other Sheets N’Things employees’ version of “Loser“, Quinn’s tender take on “It’s a Man’s, Man’s, Man’s World” and the final performance of “Give Up the Funk” was visually fun to watch, though not a vocal masterpiece. 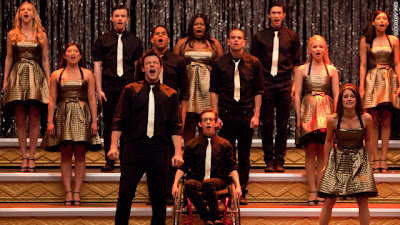 Finally, Regionals. You can follow the link at the beginning of this post for a full review of the finale, but I thought it was the perfect way to wrap up the season. I loved the music, and I thought all the little bits and pieces from earlier episodes tied in perfectly.

So, what do we have in store for next season? Personally, I’m excited to see John Stamos in a few episodes as Emma’s dentist boyfriend – though I still want her to end up with Mr. Schue. As long as the writers make sure to avoid messy plots (like the Rachel/Jesse disaster) and choose songs that fit the characters and their stories, I think the show will be just fine. Since New Directions has been awarded another year to place or win at Regionals, we could be in store for a similar general story arc to this season – “will the glee club survive?” could get a tad old, so hopefully they find a way to shake things up a little. With so many fantastic characters, I don’t think they’ll have any trouble keeping us entertained.