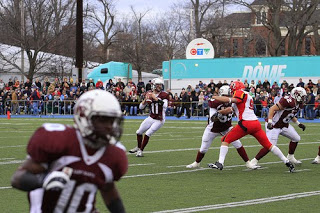 The Most Highly Anticipated Uteck Bowl in history was the most dissapointing game of the varsity season in Halifax.

Bill McLean counts down the top 20 Storylines of the 2009/10 AUS season. In this edition, Bill looks at a kicker who couldn’t miss, and a game that missed badly.
5. Holy Terry Baker! Justin Palardy Boots His Way into AUS Record Book.

In his 4th season as placekicker for the Saint Mary’s Huskies, Justin Palardy continued to build on the one of the greatest careers in AUS football history.
The Truro native has been the conference’s best kicker throughout his career, but in 2009 he took it to the next level.
How good was Palardy?
He made 23 of 27 field goals. That’s nearly 90 %.
Kicking into the hostile winds of the maritime fall, Palardy only missed 4 field goals throughout a football season that has a lot of haligonians chasing after their windswept hats.
Palardy was perfect on 27 PAT’s. Sure, it’s only 10 yards, but how many times do you see professional kickers miss these gimme boots.
Palardy didn’t miss one. He hasn’t missed one his entire career! Why would things change now?
Through it all, Palardy remained painfully humble. http://www.youtube.com/watch?v=OtuwYQPN7jE
Giving credit to teammates and coaches, insisting he was just doing his part. The modest, soft spoken kicker who would break the AUS record of 56 field goals on a late fall day in Sackville, with little fanfare or recognition.
Palardy has committed to returning for his 5th year. It will be a critical senior season for Palardy as CFL scouts are already taking notice. It doesn’t hurt that his mentor is Terry Baker, a long time CFL standout who undoubtedly has been promoting Palardy to any CFL scout who will listen.
In the meantime, sometime in October, he’ll break the CIS record for field goals of 70.On that fateful day autumn day, Justin Palardy will be the greatest placekicker in the history of CIS football.

4. The Big Game That Never Came to Fruition: Calgary Crushes SMU in the Uteck Bowl

The 2009 edition of the Uteck Bowl in Halifax may have been the most highly anticipated since its inception.
It was a game ripe with storylines; one that had Huskies fans drooling with thoughts of revenge from the moment their collective conscience realized that the game could become a possibility.
We discovered over the summer that the CIS national semi final would match the CanWest conference winner vs. the AUS champion.
That’s when it dawned on us.
SMU is going to win the AUS. Calgary is a contender in the Canada West.
Could it happen?
Indeed it could.
The Huskies beat the overmatched St.FX X-Men team at the Loney Bowl, and Calgary beat a powerhouse Saskatchewan team by 1 point in the Canwest Final.
The 2009 national semi final, named after the legendary Saint Mary’s Coach and athletic director Larry Uteck, to be played at venerable Huskies Stadium in the heart of beautiful Halifax, was set.
The build up to the game had all the intrigue and drama a fan could ever want.
First there were the coaches; Blake Nill and Steve Sumarrah.
Nill was one of the most successful coaches in Huskies history; a man who led SMU to 2 national championships during an era that may have been the greatest in the history of a program whose legacy of success matches any in the country.
Nill left Saint Mary’s 5 years ago to take over a Dinos program in shambles. It only took him 3 seasons to turn Calgary into a national contender, making it to the 2008 Uteck Bowl at Laval where they were destroyed by the perennial powerhouse Rouge et Or.
Despite the blowout loss, Nill had managed to take a doormat program and place it 1 win away from the national championship game; he just needed 1 significant addition to put the team over the top.
In January it was announced that Eric Glavic would be transferring from SMU to Calgary. Glavic was the Hec Creighton Trophy winner from 2007 and the face of the Huskies who had to miss the team’s national championship game vs. Manitoba that same season.
Glavic had been Blake Nill’s last great recruit to Halifax before he decided to bolt to Calgary. Glavic kept his commitment to the Huskies and played two stellar years at Saint Mary’s. Now, with three years of eligibility remaining, Glavic was leaving. He was heading out west to play for the man who had convinced him to go east.
It was a bitter pill for Steve Sumarrah to swallow. But he did, and the program moved on, rolling to another AUS championship, barely challenged along the way.
Since Nill’s departure, Sumarah has kept a team that had nowhere to go but down, firmly atop the AUS and one of the best teams in the country. Sumarah has guided the Huskies to a national championship game, and was recognized as CIS Coach of the year in 2009.
With Glavic however, the Huskies would have been a national powerhouse. But Sumarah lost him to a man he once held as a dear friend.
Only a select few will be privy to the inside information on how “Glavic Gate” went down, much like Les Berry’s strange resignation from Acadia. But to Huskies fans, it was a slap to the face of a proud program by 2 of its most legendary figures.
There have been many rumours concerning how far the bond that was once so strong between Sumarah and Nill has been broken by the Glavic departure. But one thing is for certain; the relationship has not been the same since the incident.
And so, the dream Uteck Bowl came to fruition.
Ah the storylines.
NIll vs. Sumarah… Sumarah vs. Glavic…. The Eric Glavic Bowl… The Blake Nill bowl.
The hype and anticipation was unreal
At least it was in Halifax.
Days before the big game we found out that TSN would be broadcasting the Uteck on tape delay several hours after the final play.
Tape delay? The Uteck Bowl?
Not just any Uteck Bowl but perhaps the biggest Uteck Bowl since its inception.
Sacrilegious AUS enthusiasts screamed. The biggest game of the varsity season in Halifax meant very little to TSN. A slap in the face for those of us who held this contest so close to our hearts, and had been counting down the days to its arrival.
As it turned out, TSN had it pegged.
The game was a bitter disappointment. Calgary dominated from start to finish. Led by Glavic, an unstoppable running game, and a big bruising defensive line, the Dinos rolled over the Huskies 38-14 in front of a stunned and saddened Halifax faithful.

http://www.youtube.com/watch?v=8woxz69dqh0
Blake Nill had walked into Huskies Stadium with the swagger of a man walking into his own living room, and led his rebuilt Dinos team to victory on enemy turf, 1 year after being destroyed by Laval in Quebec City.
The only thing Huskies supporters could take pleasure in was Nill’s absolutely bizarre meltdown on the sidelines in front of TSN tape delayed cameras, shaking and tossing about his son, Tyler.
Not much solace for football fans who thought they would be witnessing one of the biggest games in Huskies Stadium history.
Bill McLean is a local sports writer and broadcaster. You call follow Bill on twitter: “haligoniasports”; and on Facebook: “Haligonia Sports Nation.”
Email Bill at bill@haligonia.ca. Tune in to his radio show every Tuesday morning at 10:30 on ckdu.ca, 88.1 in Halifax.