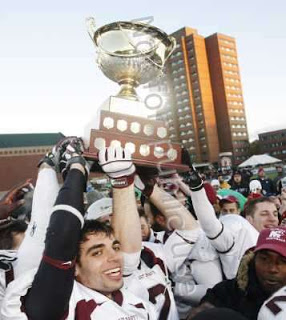 Well friends we are just weeks away from the start of another year of exciting varsity sports.
I enjoy watching the Mooseheads and Rainmen, I truly do. But it is the battles waged between universities on the ice, court, and field that get my sports fan juices flowing.
From football, to hockey, to Basketball, I love watching all the big games.
The Saint Mary’s Huskies vs the Acadia Axemen on the gridiron at Huskies Stadium; St FX at the Tower playing Ross Quackenbush’s Men’s Basketball team at SMU; Cape Breton vs Dalhousie in women’s bball at Dalplex; and UNB visiting the Huskies for another showdown in Men’s Hockey.
These are just several examples of huge games that are played every week in Halifax. It’s an exciting time.
It’s actually a cruel overload. With the NFL and NHL in full flight by October, and the Moosheads and Rainmen playing several times a week, it can be hard for a sports fan to keep up. You find yourself having to pick and choose which games you absolutely need to attend, and which ones you can read about in the paper the next day.
To help you prepare for the upcoming varsity season, here are 5 games you should not miss in 09/10.
1) November 21, The Uteck Bowl – For decades an annual tradition, we now get the CIS football national semi-final every second year. Formerly called the Atlantic Bowl, the game is played at Huskies Stadium and is a treat for sports fans who love great atmosphere. This year there is a lot of anticipation for the Uteck Bowl as it pits the AUS champ vs the CanWest Champ. Most observers believe that it will be Calgary vs SMU, meaning that former Huskies’ Blake Nill and Eric Glavic will make their return to Saint Mary’s.
2) October 24/Jan 15, UNB vs SMU Men’s Ice Hockey – These 2 teams have been the best in the AUS over the past several seasons, and therefore 2 of the best teams in the country. The AUS is hands down the best conference in Men’s hockey in Canada. Last year SMU beat UNB for the AUS title, but lost a heartbreaker in the national semi-final vs Western. UNB made the tournament as a wildcard and went on to win the national championship, beating Western 4-2. Both teams will be looking for a measure of revenge in a couple of games that will be fast, physical, and intense.
3) January 27, St FX vs SMU Men’s Basketball- Dalhousie alumni like to think that their rivalry with SMU for supremacy on the hard-court is paramount to both campuses. But at the Tower, it’s the match up with X that gets Huskie’s fan’s psyched up. The X-Men and Huskies have been the top teams in the conference for decades. Both teams have legendary coaches; Steve Konchalski at X, Ross Quackenbush at SMU. The Tower is the Mecca for basketball in Nova Scotia, and when Coach K’s kids come to the hollowed hardwood down in the South End, there are plenty of X rings to be found in the bleachers with exuberant alumni attached. Usually high scoring, competitive, and chippy, these games are standing room only. Finally, this season the game will be a 4 point contest in the standings, so both teams will be ready to play.
4) November 14, Loney Bowl- Assuming SMU finishes first in the regular season standings, this game will be played at Huskies Stadium. The emergence of Acadia and St FX as competitive programs has made this game much more interesting over the years. Last season SMU defeated X in a nail-biter, 29-27. Great family fun; lots of fired up students and alumni; the weather is usually seasonable and the beer tent is a great place to meet and greet at halftime.
5) January 1,2,3, Rod Shoveller Tournament- This annual exhibition Men’s Basketball tournament is the perfect remedy to a new year’s hangover. With the loss of the CIS championships, the tourney gives Haligonians their only chance to see some of the best teams in the country. ST FX and SMU will be there as usual, and it doesn’t hurt that Dalhousie, the defending AUS champs, are the hosts. A perfect tune-up for two exciting months of basketball in Halifax.