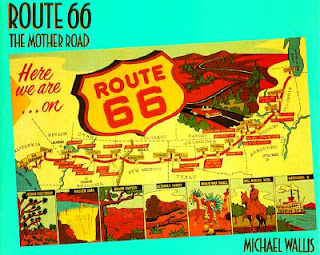 A few years ago, after watching the Pixar movie Cars, I became enchanted with the story of the towns and people who, like those in the movie, live along the famous piece of Americana, Route 66, or the Mother Road.

The stuff of music (“Get Your Kicks on Route 66”), television (“Route 66”), and books (Steinbeck’s The Grapes of Wrath, Kerouac’s On The Road), Route 66 is evocative of a simpler time, when apple pie was homemade and seasonal, diners weren’t franchised across the country, and kitsch was beautiful and real.
I’m currently savouring the glossy and fascinating pages of Michael Wallis’ Route 66: the Mother Road (put on hold after watching Cars, suspended, and kind of forgotten about until my hold suddenly came in – a nice surprise). The book is filled with beautiful close-up photos of cracked asphalt poked through by persistent weeds; arty shots of original road sign posts; black and white images of classic cars making hairpin turns, old men standing next to the diners or gas pumps that their fathers built when road surveying began; and art deco posters advertising the route itself and the publicity stunts like the ‘Bunion Derby’: a foot race along the entire route that took one man 84 days to complete (http://www.itvs.org/footrace/). 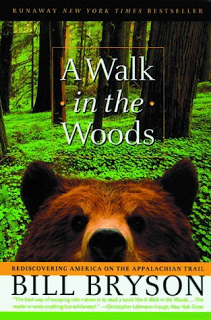 Wallis’ book reminds me of travel memoirs, like those of Bill Bryson. Two of his titles in particular, The Lost Continent: travels in small town America, and A Walk in the Woods: rediscovering America along the Appalachian Trail stick in my memory. In the former, driving across the States, Bryson ruminates on life, family, language, and, well, small towns. In the latter, he and a friend attempt to hike the entire Appalachian Trail. I’m not positive what keeps Bryson moving forward (to a point), but I do know it’s the hilarity of his writing that keeps the reader reading to the end.

Canadian author, Ted Bishop wrote a travel memoir after a serious motorcycle crash left him broken, nervous, and introspective. An English prof at the University of Alberta, Bishop had some English lit research to do in Texas, and opted to ride his Ducati motorcycle from Alberta to Austin. Riding With Rilke: reflections on motorcycles and books is part travel memoir, part motorcycle enthusiasm, part philosophy, part guide to great English authors; all kinds of entertaining!

Traveling Down the Road
https://haligonia.ca/traveling-down-the-road-4424/