Librarians are always on the lookout for the next big reading trend. It seems like it’s been vampires, vampires and more vampires for the last little while (with a few werewolves sneaking in) and lots of folks seem to agree that its time for a new trend to sweep the publishing world. I read a lot of fiction reviews, and lately I’ve been noticing a pattern. I think we’re on our way to a Gothic Fiction revival. 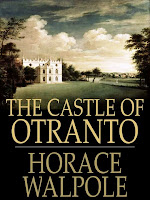 Gothic Fiction is a classic form that has long been popular and can have a fairly broad definition. Dark rainy weather? Big ‘ole spooky house? It’s starting to sound like Gothic Fiction. The Dictionary of Literary Terms defines Gothic as “A style in literature characterized by gloomy settings, violent or grotesque action and a mood of decay, degeneration and decadence.” Most people place the birth of the genre with Horace Walpole and his book The Castle of Otranto. Gothics have been popular off and on throughout the ensuing centuries, particularly once elements of romance were added. Classic authors of Gothic fiction that include romance include Charlotte and Emily Bronte, Daphne Du Maurier, Victoria Holt and Phyllis A. Whitney.

Okay, so on to my theory that we’re seeing a resurgence in Gothic Fiction. I have to admit that it was coming across promotion material for two books (both with August 2011 release dates) that started my theory hatching.

The Lantern
by Deborah Lawrenson

“When Eve falls for the secretive, charming Dom, their whirlwind relationship leads them to purchase Les Genevriers, an abandoned house in a rural hamlet in the south of France. As the beautiful Provence summer turns to autumn, Eve finds it impossible to ignore the mysteries that haunt both her lover and the run-down old house, in particular the mysterious disappearance of his beautiful first wife, Rachel.” I’ve seen more than one comparison to Du Maurier’s Rebecca for this title, and lots of discussion of its rich description of the French countryside.

In Malice Quite Close
by Brandi Ryder

The publisher gives this description: “French ex-pat Tristan Mourault is the wealthy, urbane heir to a world- renowned collection of art-and an insatiable voyeur enamored with Karen Miller, a fifteen-year-old girl from a working-class family in San Francisco. Deciding he must “rescue” Karen from her unhappy circumstances, Tristan kidnaps her and stages her death to mask his true crime. Years later, Karen is now “Gisele” and the pair lead an opulent life in idyllic and rarefied Devon, Washington. But when Nicola, Gisele’s young daughter, stumbles upon a secret cache of paintings—all nudes of Gisele—Tristan’s carefully constructed world begins to crumble…”

Two books obviously don’t a trend make, but for years working at the library I’ve encountered readers looking for current Gothic Fiction and find have found little to suggest to them: that seems to be changing. One thing I’ve noticed is that publishers tend to shy away from the use of the term “Gothic” in their descriptions, preferring the more modern psychological thriller or suspense tag: making them harder to find for true Gothic fans. All of these recent books have a Gothic feel to me. Do you agree? Are there others you’d suggest? (All descriptions from the library catalogue)

The Beginners
by Rebecca Wolff

“Struggling for a greater understanding of the world as she approaches young adulthood in her sleepy New England town, Ginger is drawn to newcomers Theo and Raquel Motherwell and becomes fascinated by their past . . . The chilling, hypnotically beautiful story of a girl whose coming of age is darkened by the secret history of her small New England town.”

The Distant Hours
by Kate Morton

“Edie Burchill and her mother have never been close, but when a long lost letter arrives one Sunday afternoon with the return address of Millderhurst Castle, Kent, printed on its envelope, Edie begins to suspect that her mother’s emotional distance masks an old secret . . . there are other secrets hidden in the stones of Millderhurst Castle, and Edie is about to learn more than she expected. The truth of what happened in the distant hours has been waiting a long time for someone to find it…”

The House at Midnight
by Lucie Whitehouse

“After the suicide of his uncle, Lucas Heathfield inherits Stoneborough Manor, a stately property in Oxfordshire. He imagines it as a place where he and his tight-knit group of friends from Oxford can spend time away from London. Over a hot, decadent summer within the claustrophobic confines of the house, past secrets emerge and sexual tensions escalate, shattering the group’s friendship and changing their lives forever. ”

Seduction of Water
by Carol Goodman

“Many years ago, Iris Greenfeder’s mother disappeared. They were living at Hotel Equinox where Iris’s father was the manager and where Iris’s mother wrote delicate, powerful fantasies. Then she took a train and never returned, dying in a hotel fire in Brooklyn where she was registered as another man’s wife. Returning to Hotel Equinox, now a struggling academic, Iris needs to find the truth about her mother; some keys are held in those fantastical writings and others in the memories of those who knew her. Kay Greenfeder, it seems, was a woman without a past. But as Iris begins to untangle the secrets of years before, she realises that the past was very different to what she had believed, and much more dangerous…”

The Thirteenth Tale
by Diane Setterfield

” Vida Winter, a bestselling yet reclusive novelist, has created many outlandish life histories for herself, all of them invention. Now old and ailing, at last she wants to tell the truth about her extraordinary life. Her letter to biographer Margaret Lea – a woman with secrets of her own – is a summons. Vida’s tale is one of gothic strangeness featuring the Angelfield family: the beautiful and wilful Isabelle and the feral twins Adeline and Emmeline. Margaret succumbs to the power of Vida’s storytelling, but as a biographer she deals in fact not fiction and she doesn’t trust Vida’s account. As she begins her researches, two parallel stories unfold. Join Margaret as she begins her journey to the truth – hers, as well as Vida’s.”