“Truth is stranger than fiction, but it is because fiction is obliged to stick to possibilities; truth isn’t” – Mark Twain
I know, I know that the heading for this blog doesn’t make a lot of sense. But the following novels are fictional accounts of factual occurrences and real lives. Believe it or not! I had always thought that the first rule in writing was to write what you know, therefore all books could be “biographical”. But the following authors took this concept a step further; judge for yourself.

Color Me Butterfly: a novel inspired by one family’s journey from tragedy to triumph (M) is an award-winning novel by L.Y. Marlow. Marlow is the third generation of her family to experience domestic violence. In this novel she presents the story of four generations of a family, with over 60 years of abuse! At the end of WWII, Eloise Bingham follows her husband Isaac away from her family and friends to another town. In doing so she separates herself from anyone who could help her when Isaac turns violent. Her children and grandchildren follow the same path that she did. It is takes a life altering tragedy to force the women to break free from the cycle of abuse. This novel could open up a huge conversation for a book-club or just among friends; well worth the read.

Cathy Glass (M) is the pseudonym of a woman who is a foster mother. It is this experience that has provided her with material for both fiction and non-fictional materials. The Girl in the Mirror and Run, Mummy, Run are based on some of the experiences her foster children have experienced (thus the pseudonym to protect the innocent).
With Run, Mummy, Run (M), Glass presents the horrific tale of spousal abuse. Aisha meets the perfect man, handsome, successful, charming, the man of her dreams. These dreams turn into nightmare when she returns home with their newborn baby. How she escapes from her abuser will have your heart racing and your fingers flying as you turn page after page.

The Girl in the Mirror (M) is another heart wrenching tale, involving the abuse of a child. Mandy has not visited her grandfather for many years. He is now dying and she returns to say her good-byes. While at the house she has had many great time she starts to remember why her precious visits where brought to an end. Sometimes it is the living who suffer more than the dying. As Fantastic Fiction states : ” ….is a gripping story of a young woman who tries to piece together her past and uncovers a dreadful family secret that has been buried and forgotten.”

Between Shades of Gray (M) by Ruta Sepetys is a different tale of World War II. The public have many tales about Hitler and the Nazis, but this among the few stories that deals with the horrors committed by Stalin. In her author notes Sepetys explains that in 1939 Stalin occupied the Baltic States. The enemies of the state were either sent to Siberia into slavery, sent to prisons or even murdered. The author creates the story of Lina, a 15 year old child artist. Like the Jews, Lina finds herself packed in a train heading for the Soviet Union. It is difficult to realize now that it was the Americans who were helping the Russians strip people of their basic human rights. Even after the war Lithuanians returned to their homes to find them occupied by Soviets. This novel reminds people that the horrors of WWII were not just felt by the Jews, but also by intellectuals, gypsies, homosexual and even Christians. As Remembrance day approaches let us remember to never forget! 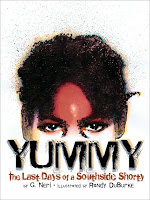 Yummy, the Last Days of a Southside Shorty (M) by G. Neri follows the life and death of Robert “Yummy” Sandifer. In August of 1994, eleven year old Yummy tries to impress the members of the Black Disciples by firing a gun at a group of rival Chicago gang members. Instead of hitting his target he accidentally kills a neighbourhood girl, Shavon Dean. The police searched for Yummy for three days before finding his dead body by the railway tracks, killed by the very gang members he meant to impress. These deaths made such an impact that Yummy appeared on the cover of Time Magazine. The fictional novelization of his story is told from the point of view of a neighbourhood boy, Roger. He is the one who tries to find out the answer to the difficult question: was Yummy a victim or a killer, or both?
So there you have it, some true stories that have been fictionalized. Hopefully, if you should write a novel about your life it will be more of a comedy or romance; not a drama! I started this blog with a quote so I will end it that way also.
“For truth is always strange; stranger than fiction” – Lord Bryon