On June 29, 2016 the Tour boat Summer Bay had a very near miss with the Grandeur of the Seas. From the TSB Report

the weather at the time was foggy, and the Summer Bay altered course, from the pre-arranged passing plan while in the Grandeur of the Seas radar blind spot. 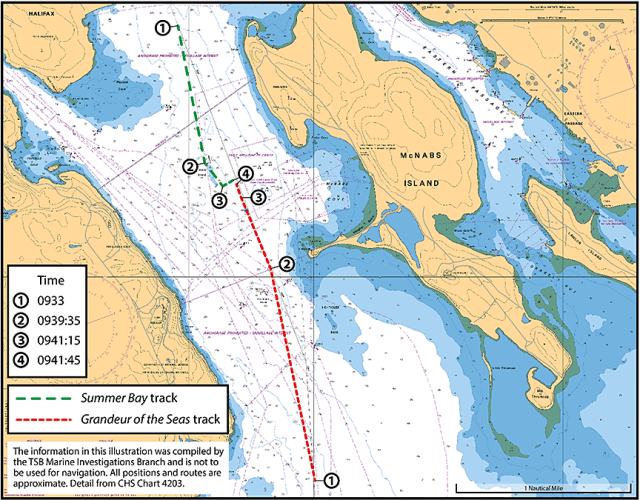 the report indicates that the master of the Summer bay was new to Murphys, and had limited experience operating vessels in Halifax Harbour and in low visibility. Murphy’s also lacked procedures for operations in low visibility.

Murphy’s the Cable Wharf has made the following changes to its tour vessels:

Given the recent issue with the Harbour Queen, one should question if these changes were enough.

Original article: TSB Report Into Near Collision of the Summer Bay and Grandeur of the Seas..

TSB Report Into Near Collision of the Summer Bay and Grandeur of the Seas.
https://haligonia.ca/tsb-report-into-near-collision-of-the-summer-bay-and-grandeur-of-the-seas-203701/