I was seriously annoyed this week when I came home from the grocery store, ready to bite into my monstrous, sweet and crunchy Cortland apple, when I opened the bag and they were all bruised and some were even mouldy!
I was pissed…My good friend and eternal optimist Jazmine told me to just make applesauce, but I absolutely refused. I would take them back to Sobey’s and get my money back goddammit! Well, that was Sunday…and then the store was closed, then on Monday I didn’t have time, and last night I was just plain lazy.
So…I called a spade a spade and made my lemons into lemonade- or applesauce in this case. And might I say, I make damn good stuff. I now have two containers hanging out in my freezer for the next impromptu BBQ pork chop, or to pair w/ a round of baked Brie!
I guess the moral of this story SHOULD be to make the best out of a shitty situation. I prefer to look at it this way: Superstore has way better quality produce! 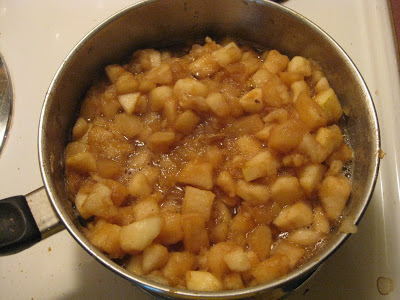 Put the apples and water in a pan, cover and bring to Med heat, stirring occasionally. Once the apples have cooked down and softened, add the cinnamon, sugar and salt. And…you’re done!