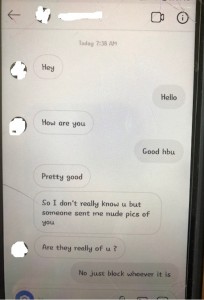 On July 21, Yarmouth RCMP responded to a complaint from the mother of a young female indicating her daughter had sent intimate images of herself to someone she met online, and now they were being shared with others.

The victim had been chatting on a social media platform with someone she did not know. They requested she send intimate images and videos, which she did. She blocked him from her account after that. She then was contacted by someone else in her contact list who told her the suspect said if she didn’t unblock them, they would share the images and videos. She unblocked the suspect, who then demanded more videos, threatening to share the ones she had already sent with her contacts if she didn’t comply. She sent more.

The victim was then contacted by another person online, who told her they had received intimate images of her online. They threatened to distribute her images unless she sent more. She blocked this user, and then told a parent what had happened.
The RCMP is investigating the incident which includes attempting to identify the two individuals who were communicating with the victim. Police would like to remind the public to check their security settings on their social media, and be very cautious when communicating with strangers online. Users should be very careful when sending photos via the internet, as once the image is online, it can never be fully deleted.

The matter remains under investigation