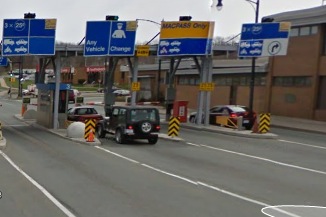 UPDATED Two officers received non-life threatening injuries after a hit and run at a Police checkpoint, and two teens are wanted in connection with a robbery at a downtown apartment building.

At 3:18 AM while police officers were conducting check point for Operation Christmas. A vehicle pulled up to the officers and then quickly accelerated, dragging one member for a short distance and a second member was thrown back from the vehicle. Both police officers were transported to the Dartmouth General Hospital with non life threatening injuries.

Updated News release at 7am:
Halifax Regional Police is asking for the public’s assistance locating a vehicle involved in a hit and run on the Macdonald bridge just after 3am today that sent two officers to hospital. The vehicle, believed to be a 1992-1996 grey Jeep Grand Cherokee, was pulled over at a police checkpoint as part of "Operation Christmas".

Two officers approached the vehicle to speak with the driver and its occupants. The vehicle quickly accelerated dragging one officer a short distance and throwing the other onto the pavement. The vehicle fled the scene and was last observed in the Thistle Street area.

Both officers were taken to the Dartmouth General Hospital where they were treated and released for non life threatening injuries.

Anyone who may have witnessed this incident or has any information on the vehicle involved or its occupants is asked to contact Halifax Regional Police at 490-5016 or Crime Stoppers at 1-800-222-8477.

At 6:56 PM a male who appears to be 45 years of age attempted to cross the street mid block. The male was struck by a vehicle. The male was transported to the QE2 with non life threatening injuries.

At 3:07 AM a male was followed into an apartment building where a party was taking place. The two females once inside pulled knives on the victim and took a sum of money from him. The suspects then left the building.

The suspects are described as: