At 4:25 p.m. on November 4, Halifax District RCMP responded to a break and enter in progress at a home in Kingswood North Subdivision in Hammonds Plains. 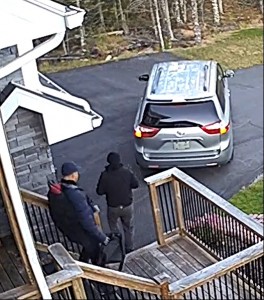 The homeowner alerted police who immediately responded and found the suspects had​ fled with an undisclosed amount of property.​ 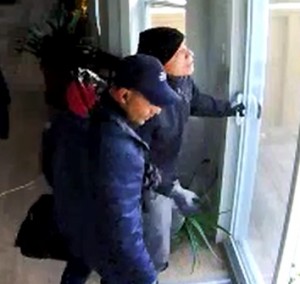 .Investigators were assisted at the scene by RCMP Forensic Identification Services.​ Photos were obtained from the​ home and are being released in hope of identifying​ the persons involved. 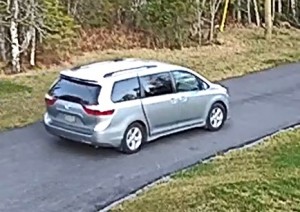 The suspects are​ both male and left the area in a silver Toyota minivan. ​

Shortly before 5:30 p.m. on November 4, East Hants District RCMP responded to a two-vehicle collision at the intersection of Hwy. 2 and Hwy 214. An SUV was turning from Hwy. 2 onto Hwy. 214 and entered the wrong lane, striking​ a Jeep head-on, on Hwy. 214. Both drivers were alone in their vehicles and neither was injured.

Police observed signs of impairment on the​ driver of the SUV. She was arrested for impaired driving and taken to the detachment for a breath test. When tested, her readings were more than three times the legal limit.

Karen Mary Fewer, 50,​ of Lantz,​ is charged with Impaired Operation of a Conveyance, Operating a Conveyance with a Blood Alcohol Concentration Over 80%, and two counts of Failure to Comply with a Recognizance. She was also charged under the Nova Scotia Motor Vehicle Act for Driving While Suspended.

She was held in cells and taken to Truro Provincial Court today. She was remanded and is scheduled to return to court on November 7.

Anyone with information is asked to contact Halifax District RCMP at 902-490-5020. Should you wish to remain anonymous, please call Nova Scotia Crime Stoppers toll free at 1-800-222-TIPS(8477), submit a secure web tip at www.crimestoppers.ns.ca, or use the P3 Tips App.