At 4:30 a.m., Halifax Regional Police received a report of a Motor Vehicle Collision where a car struck several parked vehicles in the 3300 block of Barrington Street Halifax.​ Police located an abandoned car with significant front end damage and evidence to that either the driver or passenger was injured.​ The abandoned vehicle is believed to be the vehicle responsible for the hit & run collisions.

At 5:13 a.m., police received a report from the Halifax Harbour Bridge Commission that two males were walking on the MacKay Bridge.​ Officers believe the males were same involved in the hit & run collisions.​

Police are asking anyone with information about this incident to call police at 902-490-5016.​ Anonymous tips can be sent to Crime Stoppers by calling toll-free 1-800-222-TIPS (8477), submitting a secure web tip at www.crimestoppers.ns.ca.

Two stunters charged: 64km/hr over and 73 km/hr over the limit 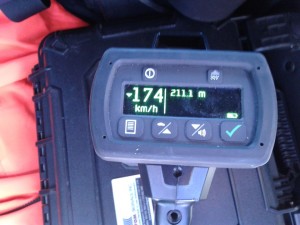 On January 31, members of Windsor District RCMP were on patrol on Hwy.​ 101 in St. Croix doing LIDAR enforcement and stopped a vehicle for driving at 174 km/hr in a 110 km/hr​ zone. The driver, a 17-year-old male from Hants Border, Kings County was charged for stunting and his vehicle was towed.

On February 1, members of Colchester District RCMP were on patrol on Hwy. 104 in Valley and as a result of a complaint from a member of the​ public, stopped a vehicle for travelling at 183 km/hr in a 110 km/hr zone. The speed was measured with RADAR. The driver, a 33-year-old man from Bermuda, was charged for speeding and his vehicle was towed.

The fine for stunting in Nova Scotia is​ $2,422.50. The RCMP want to remind the public that speed is one of the major causes of serious injury and fatal collisions on our roads. Road Safety is a priority for the RCMP, and drivers are reminded to make it their priority as well. If you see someone driving unsafely on our roads, report it by calling the RCMP at 1-800-803-RCMP (7267) or​ 911.