It was 5:30am on Tuesday January 12th when I awoke and started to prepare for the day.  Council session was starting at 10am and we had a massive agenda to complete.  The I here on the Q that a watermain had broke on Barrington Street and the area was flooded and many streets were closed.  Not a good start to an already busy day.  Emailed the correct managers to find out the status and what was being done to remedy the situation, and realized that the staff had everything under control and that my best effort to help was to stay out of the way. So I made a cup of tea and started to work on a few overnight emails when I heard of the fire on South Street.

Contacted Cheif Mosher to find out the status of the fire and he called me with the status. Many of the 25 residents had either left for work or school so no threat of loss of life, but I needed to see it for myself and felt compelled to go down to the site to see if there was anything I could help with.  Guess it’s that mother instinct that make a person think they can help in a situation like this.

When I arrived on the scene, a flackback had just occurred and the firefighters were just getting it under control.  The Cheif began to educate me on how this fire was being fought.  The building had a common roof. was 140 years old and had balloon construction.  This meant that if the fire was in the wall at a lower level that there was not fire stop to keep the flames from shooting right up to the roof .  This makes for a difficult fire to fight. 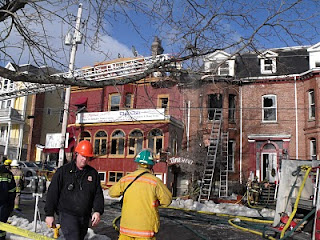 As you can see in this photo, the first set of apartments was the most seriously damaged.  The fire had made it to the roof and the fire fighters knew how to draw the fire out so they could extinguish it.

Each air tank has 40 minutes of air  and each of the tanks have alarms that sound and vibrate if the tank is low or if the fire fighter is stationary for a certain amount of time.  When I visited he West Street Fire station a few years ago, I tried on the gear and I can tell you that the tanks are not light!

There were 40 figher fighters on scene that day.  Plattoons from the peninsula, Dartmouth, Bedford and Rockingham.  Each Captain and 3 fighters along with the fire investigators, managers and the logistics.  The whole team would with percession.  every 35 minutes there was a shift change. 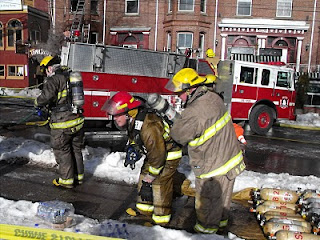 Around Noon, the fire was extinguished and the fire fighters were checking for hotspots and helping the residents with pets.  I must say, was was absolutely impressed with the firefighters and their dedication to their career.  Their ability to work together as such a cohesive team was incredible.

Aiding eachother with tank changes, keeping track of where each fire fighter was within the buildings, and how they systematically would change teams to return to the fight. 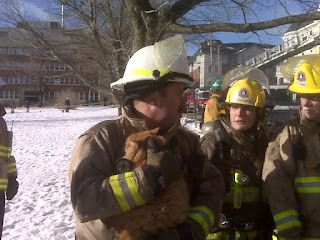 One fire fighter found a ginger cat and brought it out in his arms.  He or she was so frightened, but the fire fighter held him in his arms and kept him or her out of harms way,  This event happened repetitively for many more times.  Big cheers could be heard as each cat was brought out and reunited with it’s owner.
This again demonstrated the amazing work and compassion of these fire fighters.
Along with this heroric work, I saw even more of the compassionate side of the fire fighters as they briefed the residents, business owners and employees of the affected buildings.
Tuesday was a difficult day for all of the people affected by the fire.  It was the firefighters and the Red Cross that kept things not only organized but extremely calm.  All the volunteers of the Red Cross registered the residents, provided comfort and kind words.   My thanks to these two groups is unmeasureable.
Furthermore, The Westin, Superstore, Nova Scotia Power, Five Fishermen, HRM Police and Works crew deserve a big thanks as well.  Each gave the residents and business owners and staff incredible support and aid during this trying time.
My thoughts go out to all of the people, businesses and staff that have been affected by this fire.  I have been looking for new /temporary accommodations and hope that I can aid them in other ways.  If you have donations of furniture or other items, please contact me and I will get the word out to those affected.
A Big Thanks and Hugs to all who were so brave and helpful.
Dawn

Two Wild Events in Downtown and Why the Brave Deserve Our Thanks
https://haligonia.ca/two-wild-events-in-downtown-and-why-the-brave-deserve-our-thanks-41392/