I awake on Sunday morning to a spinning room and a headache which I can only describe as similar to a jackhammer tenderizing my frontal lobe. With slow and shaky steps I make my way to the bathroom. At first the light is painfully bright but I eventually adjust and peer into the mirror. The sight that greets me is a pathetic one. My hair, with its ever increasing flecks of grey, is in such disarray that it looks like I lost a fight with a leaf blower. My face is flushed bright red. My eyes are rimmed with dark bags and stare dimly back at me from the mirror’s smudged surface. I can’t help but grin at the pathetic spectacle even as I grip the sink in a vain attempt to maintain my faltering balance. Through the post alcoholic haze my mind conjures up three words ‘totally worth it’.
It was supposed to be a quiet night. A few weeks ago I chanced to learn that one of my favourite bands would be coming to town. I have been a fan of Bedouin Soundclash since their first album and the chance to see them live for only $15 dollars was too sweet an opportunity to pass up. Better still was that the venue, the Grawood pub, was only two minutes from my apartment. I quickly ponied up and snagged myself a ticket. By the day of the concert I was excited for the show but also tired thanks to Friday night’s excesses. But I’m hardcore so I ignored my weariness and by eight o’clock I was at the door and ready to rock. I reckoned that I would take it easy, maybe have a beer or two, and then head on home for some much needed rest. What I had forgotten to take into account was the nature of the venue. The Grawood (usually pronounced ‘Grey-wood’ though I insist it should be ‘Graw-wood’ because dropping the y from the American spelling of Gray but still demanding the same pronunciation makes no sense) is Dalhousie’s student pub which means it has certain advantages and drawbacks. On the downside it is designed to be multifunctional which gives it a very weird layout consisting largely of long banquet style tables and picnic tables arrayed in a semi circle around a combined dance floor and stage area with a standing bar relegated to the left hand corner. It is also small and a full house quickly raises the room’s temperature by at least nine degrees. This in turn produces what I refer to as “crowd sweat” and the unmistakable odour that inevitably follows. On the upside a student bar means unbelievably inexpensive drinks. In the face of such a deal it only took ten minutes for my will power to crumble and with beer in hand I poached the best seat in the house, a table dead centre in front of the dance floor, and settled in for the show. But with an hour to kill before show I busied myself with some crappy blended Scotch and a pitcher of Blue. Eventually causality took effect and I meandered my way through the crowd towards the men’s room. When I came back I discovered that my table had been occupied (despite the fact that my pitcher, glass and hoodie were clearly there) by a couple who were busy furiously making out. Eventually they stopped playing tonsil hockey and were dutifully apologetic. Ryan, Yoko and their friend Cat would end up being my companions for the concert. Now another man would probably have been bothered by the theft of his carefully chosen table but I am the friendly sort and after six beers the whole world is your amigo.
So when the music actually started I was in a fantastic mood. First up the reggae duo Mishka lead by a white Rastafarian from Ottawa. An excellent musician to be sure but incredibly preachy, thankfully the unexpectedly hot Zaki Ibrahim

was there to get us into the mood. It took her about three minutes to get the whole place jumping. Holy fuck is she talented. I`m not just saying that because I was drunk and she is really gorgeous in person, the fact is her music was original, exciting, energetic and funky as hell. She has restored my faith in Canadian hip-hop. Something that the Rascalz created and a slew of untalented hacks like Masari nearly destroyed. I of course flatly told her this after the concert when I stumbled across her by the tour bus. She seemed appreciative but she was probably just tyring to be polite to the drunk man who was fawning over her. Before long the crowd was lathered up and yelling for more. In a blinding flash of stage lighting the band kicked in and Malinowski’s distinctive voice came over the speakers. “Until we burn!” By this time I’ve had about thirteen drinks, I’m bobbing around like idiot and singing my heart out. I’m not the only one, the whole crowd is moving and the collected noise of the band and us is louder than fifteen jet engines blasting away in a Port-a-potty. You could feel the floor vibrating. For forty five minutes Bedouin bring the house down before finishing off with a medley of “Stand By Me” and “When The Night Hears My Song”, joined on stage by Zaki and her band. Drunk and clutching a plastic cup full of beer I stumble out of the pub and into the street. After bumming a cigarette I see a scuffle breaking out on the Student Union steps and with the booze now fully taking effect I step in between the two combatants and switching between the two, push them apart with a thickly drunkcented “Fuck off yah wankers!” This is my city and my night, I would be damned if I was going to let anybody ruin it with pointless ugliness.

Chest pumped out with pride I stumbled off into the streets unsure of where I’m supposed to be going. In my alcoholic haze I bummed another cigarette off some frat boys and ended up talking about Scotland while drinking grain alcohol. That is what I love about this city, about this country. I started the night off alone and sober, expecting only a quiet drink and some music but through the magic of said music, the friendliness of Halifax and the inhibative effects of alcohol I had one hell of a night, even if I knew I was going to pay dearly for it. It was a price I gladly paid and would do so again without hesitation. But that doesn’t stop the room from spinning or my grip on the sink from loosening. ‘This can’t end well’ I think, my face is flushed and my sweat is cold. I start to sway back and forth. Totally worth it…. 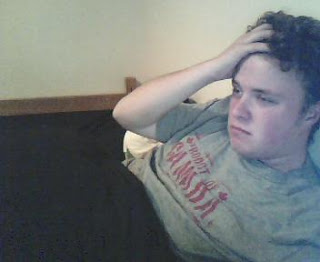