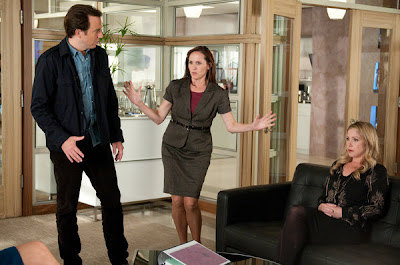 Last week I wrote about how Up All Night seemed to be figuring out what to do with Ava, and this week that trend continued. The show revolved around Ava realizing a lousy employee (played by Molly Shannon) needed to be fired, while Reagan tried to nurture her into being a better employee once she found out she was a single mom.

It wasn’t the funniest episode we’ve seen, but it definitely delivered some laughs. I loved Molly Shannon as Nancy – she was flustered and scattered in a way that was just manic enough to be funny without being ridiculous. If she’d been too manic, Reagan would have looked crazy for wanting to help her. If she hadn’t been doing a terrible enough job though, Ava would have looked mean for wanting to fire her. They managed to walk that line just right, and it was nice to see Ava depicted as more reasonable in this one situation.

Meanwhile, I think this was also Missy’s best episode, as we saw just how crazy she can be. While Nancy was a bit manic and completely unable to hold it together, Missy is someone who has gone crazy because she’s trying to hold it together. When Reagan asks to talk to her while holding the “New Beginnings” package, which they give to fired employees, Missy jumps to conclusions and freaks out – she screams about how she gave everything to the job and throws lattes on the ground. Then she did it again when she misunderstood Chris joking “everyone is fired!” when he was trying to help Reagan and Ava work through their argument. She’s a character that is great in small doses, and her craziness lets the writers ease up on Ava’s character and make her a little less insane.

Meanwhile, Chris had a decent subplot this week. He started to freak out that Amy hated him, which is likely natural for any parent stays home with a child all day and sees the baby light up when the working parent walks in the door. It’s the opposite side of the coin from the working parent feeling guilty and rejected when the baby constantly reaches for the stay-at-home parent. So they decided to get a babysitter to help ease the work load and give Chris some time out of the house. Chris wouldn’t let just anyone stay with Amy though – he wouldn’t even consider people who don’t use Macs (“it’s a different mindset”) and fired the girl they hired because she played the Grateful Dead and obviously had drugs in her purse even if Chris couldn’t find them.

The reconciliation came when Reagan and Chris saw Nancy interact with Amy and realized she’d be a perfect fit in the position. I’ll try to overlook the fact that going from a full-time gig on Ava to working a few hours a week as a babysitter wouldn’t be a plausible pay cut for someone raising a kid.

Now what I want to know is, when do we get a “Chris is Canadian” storyline? He wears Toronto Maple Leafs T-shirts and plays hockey. There’s no way that dude is American.

Even though this was just an OK episode, I still really like Up All Night. It’s moving to Thursday nights in the New Year, and while I support that decision in some ways (I think it’s a better fit there than Whit-gag-ney is) it will be hard to overlook the fact that Up All Night is on and Community is not. This show couldn’t be more different from Community, but I hope people give it a chance.

What did you guys think of “Hiring and Firing”?
Other quotes and moments I liked:

Up All Night: Gone Soft
https://haligonia.ca/up-all-night-gone-soft-48852/