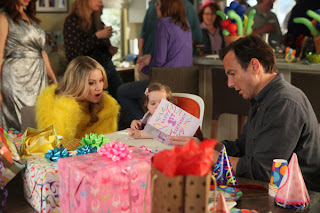 What I liked about Up All Night was that by highlighting some of Chris and Reagan’s differences, it showed that they’re really not that different after all.

Reagan is a Type A personality, and Chris is more laid back. But when Reagan decided to give in and just go with the flow, Chris realized that everything that usually bugs Reagan would bug him too – he just usually gets to let her take care of that.

This week, the thing bugging them was a joint birthday party for Amy and the baby of the annoying next door neighbors. Chris panicked and agreed to it when Reagan wasn’t around, and it was a doozy. So instead of having a small, friends/family/playgroup party for Amy, they were stuck hosting Gene and Terry’s massive family – most of whom lacked even an ounce of social etiquette. You could identify their people because, as Ava said, they were the ones with “pleated khakis, polar performance fleece, and denim shirts with Looney Tunes on them.”

There was also a subplot involving Ava thinking she was Amy’s godmother when, in fact, she’s not. I really like what this show has done with the Ava character, and the fact that she was hurt in a cares-about-Amy way and not a cares-about-Ava way.

I really think Up All Night has found its rhythm and  delivered another solid, funny, enjoyable episode here. What did you guys think?

Up All Night: Hustle and Flow
https://haligonia.ca/up-all-night-hustle-and-flow-54861/