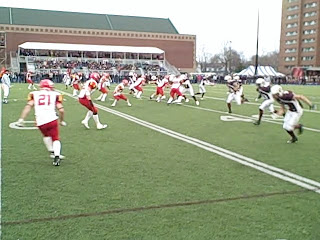 Dinos Win Uteck Bowl; Nill and Glavic Triumphant in Return to Huskies Stadium
This past Saturday, Blake Nill walked into Huskies Stadium for the 2009 Uteck Bowl with the swagger of a man walking into his own house. The former Huskies head coach was returning to face his old friend and former school in one of the most hyped football games in the city in recent memory.
As the sun set in the south end of Halifax and darkness began to loom over the Tower at Saint Mary’s, Nill reminded all the Huskies faithful and maritime football observers why he won 2 CIS championships as Head Coach at SMU just about a decade ago.
Nill’s new team, the Calgary Dinos, looked very much like the number 2 ranked team in the country, controlling both sides of the ball and leading from start to finish in a 38-14 drubbing of the Huskies.
Nill shocked the Halifax sports community when he announced he was leaving a Saint Mary’s program that he had turned into a national powerhouse to take over the Calgary Dinos. The Dinos situation was eerily similar to the one Nill has assumed at Saint Mary’s; a once proud program now down on its luck and eager to return to glory. Like clockwork, Nill took the struggling program and turned it into a winner almost overnight, just as he had done with the Huskies.

The Dinos have now won back to back conference championships and will play in their first Vanier Cup since 1995.
Matt Walker ran for 235 yards on 20 carries with 2 Touchdowns on route to garnering Uteck Bowl MVP. Walker broke the game open early with a 69 yard touchdown run highlighting a 125 yard first quarter performance that sealed the Huskies fate while many of 5700 fans were still trying to find seats. The Huskies faithful were never able to generate enthusiasm as the Huskies attack sputtered throughout the contest, leaving the honours to about 40 Calgary fans sitting behind the Dinos bench to make the most noise on this day.
Steven Lumbala also ran wild on the Huskies, adding 156 yards to a Calgary ground attack that had many Huskies fans fondly remembering the days when Blake Nill’s Huskies used to run the ball down the throats of AUS opponents.
Eric Glavic returned to Huskies Stadium where he once performed so many incredible feats as the 2007 Hec Creighton Trophy winner, while leading the Huskies to the Vanier Cup, a game he never played in due to injury. Glavic was a non factor on this day, throwing for a pedestrian 77 yards as he gave way to the high octane Calgary running game which made the highly touted Huskies rush defence look painfully average.
Now healthy and wearing Dino’s red, Glavic will get his chance to win a Vanier Cup next week at Laval. The Dinos will play the Queen’s Golden Gaels after the Gaels upset national powerhouse Laval Rouge et Or 33-30 in Kingston.
The game will be a bitter pill for Rouge et Or fans to swallow, as it was assumed their home team would be playing in the national championship trying to defend their title. If Laval had beaten Queen’s, the match up of Calgary and the Rouge et Or would have been the biggest football game in the team’s history. With Laval now relegated to watching from the stands, it will be surprising if the 16000 capacity stadium comes anywhere close to reaching its maximum attendance.
Glavic’s replacement at Saint Mary’s, Jack Creighton, struggled for the second straight year in a national semi final, throwing 3 interceptions. Creighton was the victim of a strong wind in the face of the Huskies offence in the opening quarter, and the vaunted Huskies ground attack was never able to get going, leaving Creighton with plenty of second down and long yardage situations. Tristan Jones was still suffering from an injured shoulder, leaving his brother Devon and Truro’s Craig Leger to pick up the slack on the ground. Leger led the Huskies with 63 yards.
Fifth year senior Carl Hardwick, whom Justin Palardy called the toughest guy on the team in an interview last week on Haligonia Sports, closed out his outstanding career with 8 catches and 102 yards.
Huskies Head Coach Steve Sumarah was a picture of class as always in defeat. Sumarah made his way to midfield and gave Nill, his former friend and mentor, a quick hug before shaking hands with Calgary assistants. Tension has been high between the two since Glavic’s departure from Saint Mary’s. Nill and Sumarah were always close as coaches with the Huskies and even roomed together on scouting trips after Nill left the program.
Sumarah then gathered his troops on the Huskies side of midfield and led the team in prayer and gave one final salute to the seniors. The loss has to be a bitter one for Sumarah, despite his incredible string o success since taking over the head coach position 4 years ago.
The 2009 Uteck Bowl came and went with barely a whimper, and now were left to ponder a game that had so much promise and anticipation. The Huskies were never able to get anything going against a clearly superior team, and the loss brings to a close what could arguably be the most disappointing season of AUS football in years.

Notes from the AUS
Had my first experience with a Flipcam on Saturday for the Uteck. All the videos I shot in the first half are sideways…..Forgot to have the camera rolling when Nill and Sumarah hugged after the game. It was pretty quick and void of emotion….the constant blaring of music and advertising really took away from the game. Do they really have to play a song between every single play?…..Looks who’s back: The X-Men basketball team. Coach K came into the Dalplex on Sunday and beat the nationally ranked Tigers by 11 points gaining a measure of revenge for last season’s loss in the AUS championship. It was a 4 point game in the standings so that’s a huge win for the undefeated X-Men……I talked to Coach Ross Quackenbush last week at Dalhousie and he mentioned being concerned about playing a 2 game set in NFLD vs. an improved MUN team. Sure enough the Huskies had to settle for a split…..Sean Gillis, the voice of the Rainmen, was talking AUS bball with me on the sidelines at the Uteck and he said any talk of the conference being down this year is highly exaggerated. Dal, Cape Breton, Acadia, X, and Saint Mary’s are all looking very good. It is a year where the bottom 3 teams may not be that great, with MUN showing the most promise. UNB and UPEI look like they are going to struggle….Covered the Dal Men’s Ice hockey game for ssncanada.ca on Friday and the Tigers played very well in a 3-2 loss to Acadia. The Axemen are playing solid, disciplined hockey and are currently in second place in a conference that has 2 of the 3 best teams in the country, the undefeated UNB V-Reds and the Huskies…. If you get a chance to see the UNB Varsity Reds men’s hockey team play this year, take it. They are very, very good. Right now they are 11-0 and I would not be surprised to see them go undefeated in the country’s toughest conference. The Reds play the Huskies on Jan.15 and the Tigers on Feb.6 (ssncanada.ca)…..I wouldn’t want to be a Huskies hockey player this week. Chances are very good that Trevor Steinburg is not pleased with his squad dropping 2 games over the weekend, including 1 over a UPEI team that has had a very distracting week with their head coach resigning.