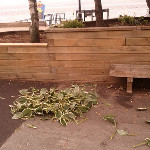 Release:
Halifax Regional Police is appealing to the public for their help in connection with damage to and thefts of plants and flowers.
This summer there have been a number of incidents where plants have been stolen or damaged. Over the last month, a number of plants have been stolen from various HRM gardens. Today, officers responded to a complaint of property damage where a number of plants, shrubs and trees were ripped out along the boardwalk in downtown Halifax. Investigators are hoping to identify the person(s) responsible for the damage through video surveillance but are asking anyone with information about the thefts/damage to call police at 490-5016.
Every year, a great deal of effort is made to beautify the city for residents and visitors to enjoy, and these senseless acts are not only costly but detract from the city’s appeal. Halifax Regional Police is asking anyone who observes someone committing vandalism, theft or any other crime to call 911.

Vandals do more than stop to smell the flowers
https://haligonia.ca/vandals-do-more-than-stop-to-smell-the-flowers-41657/