Many thanks to Queen Vic for this long weekend which always signals that summer is just around the corner. This year Queen Elizabeth, her great-great-granddaughter, celebrates her own Diamond Jubilee, sharing this unique milestone in British history with Queen Victoria. Whether you celebrate Victoria Day, National Patriot’s Day or the May two-four, let’s acknowledge with woman who brought us this much appreciated holiday.

1897 marked Queen Victoria’s sixtieth year on the throne. Known as the “Grand mama of Europe”, Victoria’s reach extended throughout Europe as her descendants married into multiple royal families. In Twilight of Splendor: the court of Queen Victoria during her diamond jubilee year (M) by Greg King, we get a picture of Great Britain and Victoria in the year of her diamond jubilee. We see an elderly woman whose daily routines were rigidly established and fascinating details about the day to day life behind the scenes at her palaces. By this time her relationships with her children were understandably strained, and it appeared to be an exhausting job to please her and keep her comfortable. Twilight of Splendor is filled with fascinating details bringing to life a moment in time in nineteenth century Britain.

A transformational event in Victoria’s life, both personal and public, was the early death of her beloved husband Albert. In A Magnificent Obsession: Victoria, Albert and the death that changed the British monarchy (M), Helen Rappaport describes a 40 year period of mourning following the death of this man Victoria declared to be perfect. She exerted pressure on her children to keep him foremost in their thoughts, delaying a natural coming to terms with loss. She absented herself from public life while still drawing a public income, causing sympathy to turn to irritation. In her extreme grief she declared that the room he died in to remain untouched. His valet laid out his clothing every day for the rest of Victoria ‘s life. This intense mourning affected more than just the nation’s spirit, soon even the garment industry, so important in England, was impacted by the protracted wearing of mourning clothes. Throughout their marriage, Albert had assumed a commanding role both in their public and private lives and his death left a devastating void. 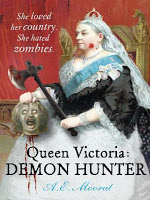 How long does it take to become a fictional character? Roughly 110 years it seems. Would she have been amused by Queen Victoria: demon hunter (M) by A.E. Moorat? A youthful Victoria assumes the throne of England in 1837 ready to face international affairs, hunger, poverty and demons. Demons come disguised in aristocratic clothing and includes her own beloved Albert who purpose is to place a demon on the throne. Victoria must perfect her swordsmanship and engage in a bloody battle to save her kingdom.

In another alternative reality The Bookman (M) by Lavie Tidhar features a young man named Orphan, who uncovers the truth about a terrorist attack in nineteenth century London, meeting up with numerous literary and historical figures along the way. This world is controlled by strange aliens, featuring and including Queen Victoria as a bipedal and intelligent lizard.

Finally, rather more rooted in reality if not in fact is A Flaw in the Blood (M) by Stephanie Barron. Irish barrister Patrick Fitzgerald has been summoned to Victoria’s Court while Albert lies dying. His carriage is attacked on the way there and he and his niece are caught up in a dangerous situation involving court intrigue and deadly secrets.

Victoria Day and the other Diamond Jubilee Year
https://haligonia.ca/victoria-day-and-the-other-diamond-jubilee-year-60648/