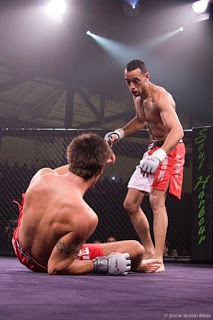 Since the announcement was made that W-1 was coming to do a show in Halifax, the mixed martial arts scene in the Maritimes has been waiting to see who will be fighting in there own backyard. Over the weekend, the company has put the card up on there website and that the show will take place at the Halifax Forum. The result should leave mma fans pleased.

“We are very excited to be coming out to Halifax and were putting on a little but more of a local card,” says Jack Batemen, W-1 President/Founder.

“What we have done is try and take the top local talent from the east coast and have it for everyone to see across the country. Were really excited to have this new ground that were moving into and to come back on a regular basis.”

The Main event will see a heavyweight bout Brett Rogers (10-2) and Ruben Villareal (18-18-3). Rogers has made a name for himself going 10-2 in companies like Strikeforce and Elite XC with wins over former UFC champ Anderi Arlovski. Rogers has lost two straight thou against top ranked heavyweights Fedor Emelianenko and Alistair Overeem. Villareal has been well traveled in his career fighting in various organizations like Strikeforce and King of the Cage. He biggest feet in his career was taking former UFC champ Don Frye to a draw.

In the co main event, Halifax’s Roger Hollett (10-3) will face Mike Clark (1-1). Hollett has fought many times in his hometown where he picked up the Extreme Cage Combat Light heavyweight title in the process. He has also has success in Alberta where he won the MFC light heavyweight title over Victor Valimaki.

The card will also see local guys such as Matt Macgrath, Tristan Johnson and Jason Mackay as well as some big names from the international stage like TUF 11 contest Jamie Yager, Bellator Fighting Championship veteran Will Romero and Bellator signed Sean Pierson.