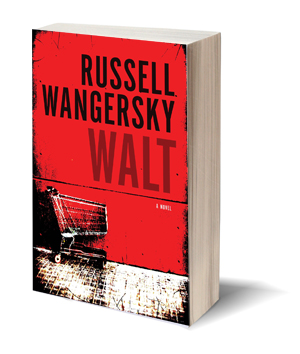 My most recent reading journey took me to Newfoundland – or to what we in Atlantic Canada affectionately call “The Rock”.
Set in modern day St. John’s,  Newfoundland’s capital city, the novel features a solitary, fifty-something grocery store janitor named Walt.
Walt is one of the invisible members of society.  Quietly and unobtrusively pushing his broom, cleaning up other people’s messes. Dressed in a uniform which people tend to ignore – until they need his cleaning services and then they don’t look him in the eye…

He lives alone in a house on McKay Street in east end St. John’s.  A house that he once shared with his wife Mary – though now she is gone…  Theirs was a volatile and childless marriage.  Mary left him?  Moved back to her parents? Went out West? Died? – we don’t know.  All we know is that she isn’t there anymore.  Now Walt lives a solitary existence, moving from his house to the grocery store where he works and taking long walks around his home city.  He loves to fish and deems fishing to be an almost religious experience.

Walt has a very keen interest in human nature.  He is a rapt observer of everyone who enters his store.  In fact in everyone he encounters.  This is in part due to his loneliness.  He feels stifled by his insular life, but can not see his way to make the changes necessary to lift him from his routines.
Told almost all from the point of view of Walt, with the odd short chapter told from the point of view of two members of the RNC (the Royal Newfoundland Constabulary), the novel describes Walt’s daily life and his obsession with the grocery lists that the customers from his store discard with abandon.  He collects these lists.  In fact he has bankers’ boxes full of them.  Why? you might ask.  Because they reveal SO much about the writers.  Also, many are written on used envelopes, business stationery, etc. – so in addition to speculation about the writer from the content of the list, Walt often also culls more pertinent information about them… like their home addresses.  Walt has made the study of others habits his doctoral thesis.   He sees his lists as puzzle pieces of a puzzle only he can complete.  His abundance of free time and his dogged determination to discover things about his ‘targets’, make him ideally situated to succeed in his mission.  Is he a stalker? Yes most certainly.  Is he guilty of more serious crimes?  We don’t know…

A week or so after Mary ‘left’, Walt reported her missing.  Now, years later, two members of a ‘cold case’ squad of the RNC have taken up the task of tracing her whereabouts and closing the case.   They suspect Walt of foul play, but there is absolutely nothing to base this suspicion upon.  They have searched his home so many times that Walt actually has a box of ‘search warrants’ in addition to his myriad boxes of grocery lists.

Yes Walt is ‘different’.  But is this why the police suspect him?  Because he is not ‘like’ everybody else, he is misunderstood.  He admits he is peculiar.  He recognizes this about himself.  He doesn’t react to events in the same way that others do.   The police find him unfathomable.  But is he guilty?

Told in the simple yet strangely astute voice of Walt, the novel will keep most reader’s guessing until the last chapter.  A simple, yet deceptively deep psychological thriller that will remain in the reader’s memory.   Once you meet Walt, you are unlikely to forget him.  Highly recommended!

Russell Wangersky is an award-winning writer of fiction and non-fiction. Based in St. John’s, Newfoundland & Labrador, he is the author of several books and the news editor of the St. John’s Telegram.