First of all, I'd like to show off how awesome my husband and I did in the month of April with our exercise calendar! The top half of each day is my exercise and the bottom half is The Husband. Little stars represent 30 minutes and big stars represent 60 minutes. We had to upgrade our system when we realized we're running short of stars and

First of all, I’d like to show off how awesome my husband and I did in the month of April with our exercise calendar! The top half of each day is my exercise and the bottom half is The Husband. Little stars represent 30 minutes and big stars represent 60 minutes. We had to upgrade our system when we realized we’re running short of stars and

most of our workouts end up being 60 minutes! < —-how awesome is that?! 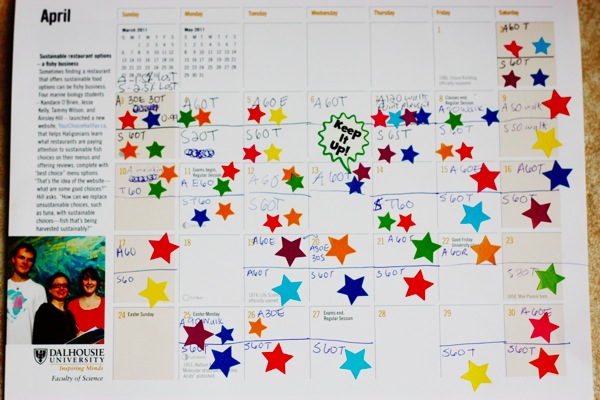 If you remember, the husband and I have a weight loss competition that we are rocking and we have completed TWO full months of regular exercise! Holla!!!!! I can’t express my excitement enough about this because regardless of how much weight I had lost “before,” and even though I had taken up running, I can honestly say that I have never in my life committed to making exercise such a regular part of my life for such a long period of time! My MFP exercise goal is to exercise 30 minutes 3 times per week and I don’t think there has been a week that I haven’t far exceeded this goal so it feels great. But of course there have been weeks when I really wasn’t feeling my exercise mojo at all.

Which brings me to my next point. Motivation waxes and wanes. I know I wouldn’t be getting my buns down to the basement to workout if it weren’t for the incredible resolve that my husband has dedicated to his efforts. He’s seeing great results and it’s fueling his fire. I can’t get over the changes in him. Every way he moves and every angle I look at him he looks significantly smaller and it’s very exciting. I’m willing to bet at this weekend’s weigh-in he will hit his 20 lbs lost mark! There is just NO stopping him and that benefits me significantly because I don’t like the sideways glance he gives me as he heads on down to the basement to workout when I’m lacking in the mojo department so eventually my wanes always wax again in a much quicker fashion than they would have in the past.

Motivation waxes and wanes for everyone and it’s an inevitable component of adopting any healthy living regime, you just have to find ways to make it wax without letting the wane throw you off too much! Don’t let it deflate you and get you down! Remember it doesn’t mean that you’ve “failed.” I hate that “F” word when you are trying to make a positive change for yourself. Make a decision. Get back at it! Why on Monday? What is so special about Monday? Because it will allow you to give yourself permission to overindulge and put yourself further behind and you will have to work harder to get back! Don’t do that to yourself!

This journey already takes X amount of weeks/months so just do it and get it over with! The way I look at it is that I am not going to be happy until I get back to my goal, so why prolong the process more than I already have? Another way I’ve started looking at this is a little opposite from the “one day at a time” approach. Yes you have to take one day at a time and thinking of it that way helps you give yourself permission to press the re-start button whenever you need it, BUT looking at this from a logical “grand scheme” standpoint, it is going to take me approximately 8 months to get back to my goal weight – period. Fact. So if I didn’t have a great week either on the scale or in the exercise department which has happened the last few weeks, I’m just chalking it up to a minuscule part of the grand scheme, instead of looking at this like a “weekly” thing. The reason I started bring this perspective forward is because it helps me put an “end” date to the day I achieve my goal, rather than some arbitrary, possibly “non-existent” date in the future. Know what I mean?

It helps to remember that it’s an inevitable part of the process. I remember when I was steam rolling the pounds during my MVA recovery and it was all so new to me and exciting that I felt motivated for a VERY long time before losing some steam, despite my physical limitations at the time. Now, the “no matter what” motivation doesn’t last nearly as long because I’ve been at this for sooooo unbelievably long for one, and I’m a Mom now which is exhausting! But I’m finding ways to bring it back and right now I think it’s my husband’s resolve. It’s like night and day having him dedicated to his healthier lifestyle. While our food preferences are still very different, it makes it MUCH easier to eat well yourself when your partner is doing the same. No resisting frozen pizza in favour of steamed broccoli which I can say was a temptation I’d be faced with quite often in the past!

Of course, it certainly doesn’t hurt that we both have the very same source of motivation behind us both :-): 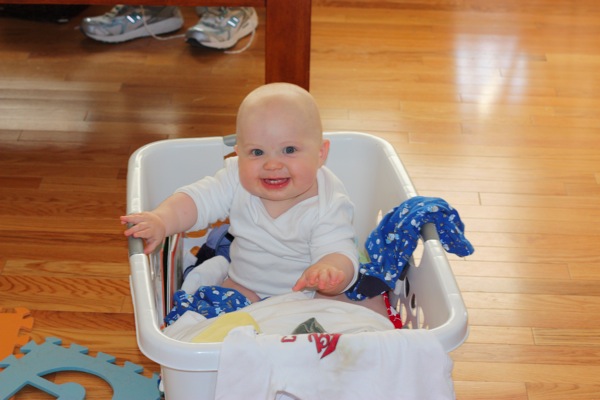