A picture of a boy: it’s either burned painfully in your memory or something you’ve worked to avoid seeing over the last week. It’s the image of 3-year-old Aylan Kurdi lying face-down in the sand, drowned off the coast of Turkey with this brother and mother as they attempted to flee war-ravaged Syria.

Although the refugee crisis is far from new, this picture may well represent the tipping point in attracting world attention to the struggles and suffering of thousands and thousands of refugees like the Kurdi family. Aylan’s father Abdullah was quoted in the press as saying, “the things that happened to us here, in the country where we took refuge to escape war in our homeland, we want the whole world to see this.”

As we in Canada try to determine what is happening and what we can do to help, it’s important that we understand what factors led to the current situation and what role Canada and other western nations have played in its formation. The West has been slow to react to a tragedy that has seen more than 300, 000 refugees and migrants try to cross the Mediterranean so far this year, with 2, 500 dying in the process. In the campaign leading up to the federal election in October, refugees have suddenly become a hot issue. Critics of the Harper government’s refugee policy cite past examples where large numbers of people were admitted to Canada – such as the Vietnamese “Boat People” – in their arguments for change. By contrast, we are also hearing stories of generosity shown by individuals and nations who have stepped up to our global responsibility to care for those in need.

The following resources can provide some much-needed background as you follow the unfolding #refugeecrisis. If you want to do more, there are many reputable local and international aid organizations that could benefit from your support. 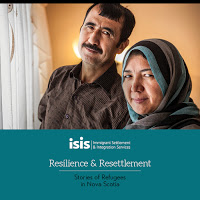 The Rise of Islamic State: ISIS and the new Sunni revolution by Patrick Cockburn

Beyond Terror: The Truth About the Real Threats to Our World by Chris Abbott, John Sloboda, and Paul Rogers

A hundred years of Immigration to Canada 1900-1999: a chronology focusing on refugees and discrimination by the Canadian Council for Refugees

The Amelie: Canadian refugee policy and the story of the 1987 boat people, an audio documentary by Ella Bedard and Jane Kirby

Resilience & Resettlement: stories of refugees in Nova Scotia by the Immigrant Settlement and Integration Services and Valerie Mansour

Everybody’s Children, a film by the National Film Board

Frontier Justice: the global refugee crisis and what to do about it by Andy Lamey

It’s also worth noting that Lawrence Hill, author of The Book of Negoes, has recently published a novel about refugees, entitled The Illegal.

"We want the whole world to see this.": The Refugee Crisis
https://haligonia.ca/we-want-the-whole-world-to-see-this-the-refugee-crisis-111191/