Help keep the Lights On! Yesterday I tweeted a map of all the harbour traffic that passed through Halifax in one month. there is a couple hundred dollars of equipment required to provide the realtime positions of ships in the harbour, and its been replaced once since it went into operations.   if you like […]

Help keep the Lights On! Yesterday I tweeted a map of all the harbour traffic that passed through Halifax in one month. there is a couple hundred dollars of equipment required to provide the realtime positions of ships in the harbour, and its been replaced once since it went into operations.   if you like HalifaxShippingNews.ca, consider becoming a member. 2$ a month really helps cover costs, and in return you get the site Ad Free.

For latest port conditions, Including Weather,Wind, Tides, Arrivals and Departures be sure to visit the Port Report (Members get the information in realtime, not every 2 hours)

1. Fishing Gear and Whales
A couple of university students are developing rope-less fishing gear –  there is actually still a rope, but it will only deploy when the gear needs to be retrieved. Timely, as there are reports of a Right whale tangled in gear in the Mouth of the Bay of Fundy. Rescuers are hampered by weather trying to find the Whale.

2.Tidal Power
apparently the French Naval Defense Firm DCNS has applied to shutdown OpenHydro, and liquidate it. the Company that is working with Emera in a joint venture Cape Sharp Tidal, to test turbines in the Bay of Fundy. the project just installed their second turbine last week.

Apparently the bankruptcy was known to the company before the turbine was installed, and has potentially left many Local businesses holding the bag.

This may be something that makes sense for Emera to buy outright. given the interest in Oceans sector research in Nova Scotia, and as a source of Renewable Power – this could be a great thing – certainly better then Wind Tubine parts.

3.Shearwater Turns 100
Shearwater began life in the waning days of the first world war as a Naval Air Station. today, 100 years later, it still serves in that capacity. Of note, Seakings have been flying from that base for more then half of its existence. (Seakings are to be retired in December, 55 years after entering service).

4.Yarmouth Ferry
A Maine company has submitted a proposal to operate a ferry between bar Harbor and Yarmouth. Seemingly a more modest operation then bay Ferries Cat, they seem to think they can make a go of it. BFL is also proposing to relocate from Portland to Bar Harbor to save fuel costs.

Here’s another cautionary tale of what should not be crossing the harbour! They were bailing and apparently have no idea how to trim their rowboat so that it doesn’t ship water! And yet, they refused assistance.

2. Nautical History.
I stumbled across the blog of author Phillip K. Allen its full of interesting nautical history, including this description of a Upper class, Victorian tattoo. apparently

Lord Charles Beresford, a distinguished rear admiral… is said to have had a large tattoo of the hounds of the Waterford Hunt in full cry. The dogs poured over his shoulder and down his back in pursuit of a fox. Only the tail of the fox was visible, the rest of the animal having apparently disappeared up Admiral Beresford’s arse. 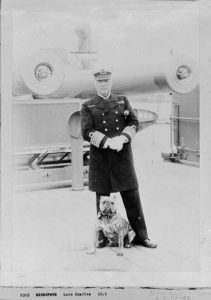 SO yah – Check out the blog – its relatively new, but good.

So On that Tattoo.. the internet has turned up no pictures of that, though there is apparently one (or one like it) in Desmond Morris, Bodywatching (1985), 179.  and the British parlement’s Hansard turns up descriptions of it in Tattoo Debates.

(Thats Beresford and his Bull dog on the right)

July 31 1942 – An Order in Council creates the Women’s Royal Canadian Naval Service (WRCNS). Nearly 6,500 women will enlist for service during WWII. Also on this Date, HMCS Skeena and  HMCS Wetaskiwin sink the German submarine U-588 mid-Atlantic.

July 30 1768 – James Cooks first voyage to the pacific is Authorized by the Admiralty. Prior to his pacific trips Cook spent time in Canada, charting Halifax and Newfoundland, taking part in the Siege of Quebec, and the Fall of Louisbourg. 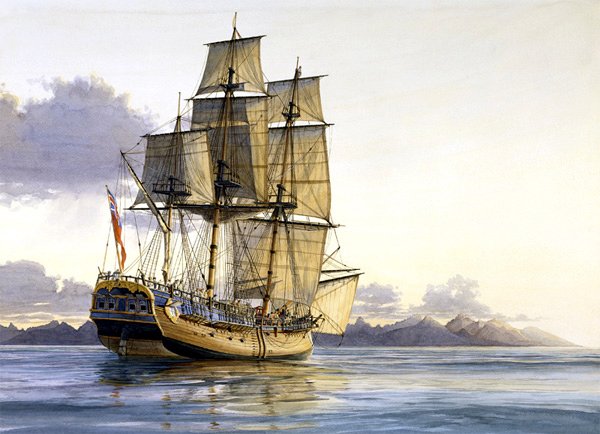