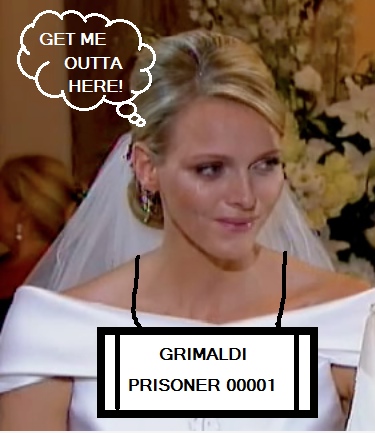 However, I have recently become significantly more

ceremony. In the video, the bride, a former Olympic Swimmer from South Africa, cannot control her tears as she stands arm-in-arm with her groom (who happens to be 20 years her senior). Brides get emotional at weddings, so that’s really no so crazy – but these tears don’t seem to be tears of joy, but rather tears of complete and utter misery and fear. She is pictured shaking and wiping her eyes with kleenex as her husband maintains a steely glare and doesn’t offer any sort of comfort or tenderness towards his new bride. When the couple finally kisses, it has all the passion and romance of a kiss that you would give your great aunt Myrtle (the one with the hairy mole on her chin) at your semi-annual family reunion. One can’t help but wonder what the hell is going on here?!

So, I did some research in to the situation, and suddenly the Royal family of Monaco became much more interesting (albeit for entirely different reasons than Wills and Kate). It seems, according to various media reports, that in the year leading up to her nuptials Charlene Whittstock has attempted to escape Monaco and return to South Africa on 3 separate occasions. However, her passport was taken away from her, making it impossible to leave. When she sought help from the South African embassy, they turned back over to the Monacoian* officials. Sweet Jesus. This woman is a captive!

Prince Albert (who REALLY seems like a dick) has at least two illegitimate children that we know of, neither of whom is eligible to be heir to the throne. He’s under pressure to produce a ‘legitimate’ heir, and it looks like Charlene Whittstock is his chosen baby-maker. While she may have been lured by the life of a Princess at one time, based on the wedding video I’d say she’s pretty much over it. The couple are now on their honeymoon to South Africa, but allegations have been bubbling that Albert has fathered yet another child with yet another mistress in the last 2 years, despite the fact that he has been in a relationship with Whittstock for about 5 years. SCANDALS!

Anyway, I’ll be keeping my eye on these two over the coming weeks to see how this whole thing plays out, but in the meantime, you MUST watch this video.

Tell us what you think. Is Charlene getting exactly what she signed up for? Or is she a Prisoner Princess?

*I definitely had to google the proper term for an individual from Monaco. Now you know.

About Needs To Stop