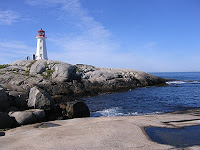 Peggy’s Cove without a lighthouse? Impossible to imagine!

As I was writing Saturday’s posting and learning about Evelyn Richardson’s We Keep a Light, it brought to mind the recent news of DFO’s decision to declare many lighthouses (including Peggy’s Cove) surplus. Lighthouse literature, both fiction and nonfiction, carries with it a sense of nostalgia and sadness. Lighthouses evoke images of isolation, contemplation, mystery and romance. They represent a bygone era and are now at risk of physically disappearing without government protection.

A Watch in the Night: the story of Pomquet Island’s lost lightkeeping family by Ruth Edgett is a beautiful story about a family who spent four decades tending the lighthouse on Pomquet Island in St. George’s Bay. A blending of fiction and nonfiction, Edgett asked her mother and her mother’s siblings to write their reminiscences about their very unique childhood. Although she originally intended the stories to be private, she quickly realized she had something valuable to share.

George and Ruth Millar moved their young family to Pomquet Island in 1924 for the relatively prosaic reason that it guaranteed them a regular income. George and Ruth met as teenagers and maintained contact despite a separation when George moved to the prairies with his widowed father and his sojourn in World War I. Although her parents intended her to be a spinster helper in their old age, she showed signs of her early determination when she married George and dissuaded him from returning west. Her home was in Nova Scotia. Over the years the family grew from two children to six. As a family they developed resourcefulness and independence as they had to cope with a large family with no running water, no electricity and limited communication with the outside world. They guided their children and kept them safe with kind discipline. Safety demanded that the children mind their parents. The interior world began to match the exterior, and these resourceful, independent and solitary traits were passed down the generations.

This is a warm, gentle book that doesn’t run to saccharine.

A Watch in the Night has a frontier feel about it, echoing the same sort of hearty independence found amongst early settlers in the United States. Nancy E. Turner has written novels based on her own family’s stories in These Is My Words: the diary of Sarah Agnes Prine, 1881-1901: Arizona Territories: a novel and Sarah’s Quilt: the novel of Sarah Agnes Prine and the Arizona Territories, 1906.

“A moving, exciting, and heartfelt American saga inspired by the author’s own family memoirs, these words belong to Sarah Prine, a woman of spirit and fire who forges a full and remarkable existence in a harsh, unfamiliar frontier. Scrupulously recording her steps down the path Providence has set her upon—from child to determined young adult to loving mother—she shares the turbulent events, both joyous and tragic, that molded her, and recalls the enduring love with cavalry officer Captain Jack Elliot that gave her strength and purpose. Rich in authentic everyday details and alive with truly unforgettable characters, These Is My Words brilliantly brings a vanished world to breathtaking life again.” – publisher

Lighthouse keeping is a way of life that has virtually vanished, at least in our part of the world. Rockbound by Frank Parker Day is considered to the classic novel illustrating life on Nova Scotia’ south shore and describes the life of fishermen isolated on an island off the coast of Nova Scotia. This manner of living is becoming increasing rare as we move to an increasingly urban society.

“To the harsh domain of Rockbound — governed by the sternly righteous and rapacious Uriah Jung –comes the youthful David Jung to claim his small share of the island. Filled with dreamy optimism and a love for the unspoken promises of the night sky, David tries to find his way in a narrow, unforgiving, and controlled world. His conflicts are both internal and external, locking him in an unceasing struggle for survival; sometimes the sea is his enemy, sometimes his own rude behavior, sometimes his best friend Gershom Born, sometimes his secret love for the island teacher Mary Dauphiny; but always, inevitably, his Jung relatives and their manifold ambitions for money and power.”- publisher

When the Lights Go Out
https://haligonia.ca/when-the-lights-go-out-18415/