Who knew the literary world could be so combative? Sure a bit of a rivalry really ups the tension in a book, and can keep the plot rolling along – but I was surprised of late the number of books I could find that lay that competition out right from the get go. Oh well, at least you know what you’re getting into: 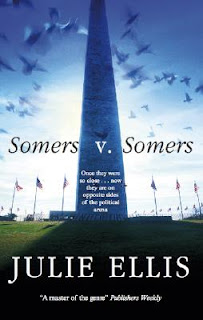 Eleanor vs. Ike by Robin Gerber: alternative history that explores what might have happened if Eleanor Roosevelt had run against Dwight Eisenhower in the 1952 US Presidential Election.

Bear v. Shark by Chris Bachelder: I like the way this quote from Publishers Weekly sums this book up: “Reading like Don DeLillo on acid, Bachelder’s brilliant, bizarre debut is a futuristic one-joke novel about a whimsical confrontation between two unlikely predators.”

Scott Pilgrim vs. the World by Bryan Lee O’Malley: the second title in the graphic novel series with a local connection. Author Bryan Lee O’Malley used to live in Halifax, and Scott Pilgrim – the rocker whose romantic antics form the basis of the series – is named after a song by Halifax 1990s band Plumtree.

Somers v. Somers by Julie Ellis: Somers and Somers are husband and wife, he a popular Democratic politician, she the wife that has stood behind him. When he ditches his political party AND his wife shortly before the election, the two face off against each other in a novel that mixes emotional and political tensions.

State versus Justice by Gallatin Warfield: the murder of a child and an old rivalry between two lawyers form the basis of this novel. Throw in some cold war politics and the fact that the accused is a known criminal and you’ve got the makings of a compelling legal thriller.

Why Can't Everyone Just Get Along?
https://haligonia.ca/why-cant-everyone-just-get-along-5024/