Ally: It’s never good to start a post realizing that you are going to be scrounging for witticisms like Lohan is scrounging for change in her bargain basement purse (See? Horrible). I don’t operate well when I’m tired. Some (my husband) might say I’m a massive bitch when I’m tired. I’m tired today, people. But I’m 100% committed to sharing with you my horrible taste in all things pop culture regardless of lack of sleep. I shall soldier on!

L-A and I had a brief email exchange today around what we were going to deliver for our Wednesday post. As L-A was a tad “under the weather” today, she was also fighting for inspiration. What about a Random Style Icon post, suggested L-A, those are fairly easy to write she noted. Yes, true. Three more emails were sent back and forth trying to find a show we both watched. Nothing. We then tried to find a show we might have both watched as teenagers. The only thing we found? 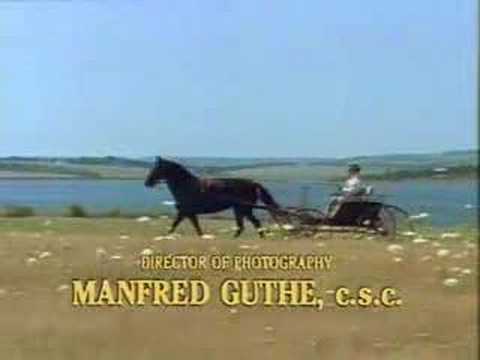 I always wanted to be Felicity. She was fierce in her petticoats. L-A agrees,

We totes need to do some Felicity from Road to Avonlea. Bitch started to get some mad steez after she set her sights on Gus Pike.

And so it shall be. In the future though, as today we are reviewing the Met Ball fashions. After looking through a few photos, I was less than inspired to continue the hunt. I turned to Official Intern Krista on The Twitter and asked for her help. Britney Spears bless her heart, she came through. But first here are my top faves and my “wtf” award. 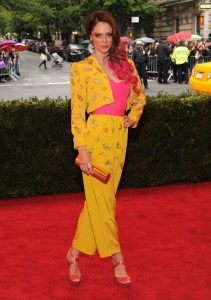 First things first, the Met Ball means you can up the crazy. It’s the Carrie Bradshaw of Dressy Events. Therefore I will be approving of otherwise ridiculous outfits, such as the one seen above on Coco. Apparently this Givenchy number was worn by Elizabeth Taylor. I can’t find a photo so you’ll have to trust my infinite wisdom. Bonus points for the hair, Coco! For the record, Krista agrees with this choice.

I know without a doubt that L-A will hate this dress. WITH.OUT.A.DOUBT. 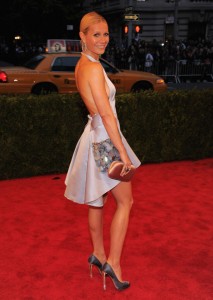 Look, the lady eats only carrot sticks and grilled chicken (or so I read on the irresponsible gossip blogs), so let her show it off in some Prada. She looks amazing.

Throughout the history of time women have been dressing to make other bitches jealous. Blake Lively? Pick up the phone. 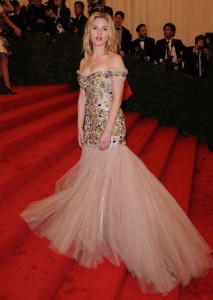 Krista filed this under “on the fence” stating, “I don’t get these dresses that are like two fundamentally different dresses put together by a blind person.” 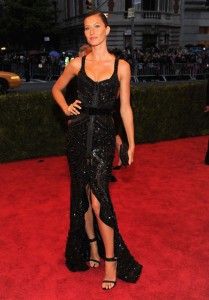 It’s the dress equivalent of a sleep aid.

That said, after the frenzy of award season activity, I’m terribly bored by many of the dresses that showed up at the Met Gala. Each one of them is carefully considered and exquisitely constructed, but sweet peaches, they’re boring. Or, at the very least, they’re not interesting. Being boring, you may recall from the award season liveblogs, is one of my fancy dress cardinal sins. This is an event for the Costume Institute. Go bold and brave, peoples. Or, stay home and blog about it in stretchy pants.

A lot of the dresses I loved this year were Prada. No mere coincidence, the Met is currently running an exhibition at its Costume Institute showcasing the work of Miuccia Prada and Elsa Schiaparelli. What’s that, Internet? I should go to New York right away and see it before it ends in August? You may be on to something. (Editors note: I smell a guest post!)

The dress is exquisite, but also reminds me of the Met. That’s right, bear with me. The Damien Hirst pickled shark used to be at the Met and you weren’t allowed to take pictures of it. However, there was a concave mirrored sculpture by Anish Kapoor next to it that reflected the pickled shark perfectly. 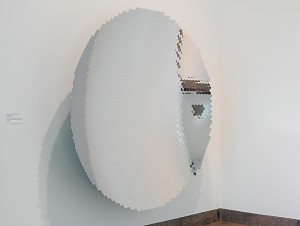 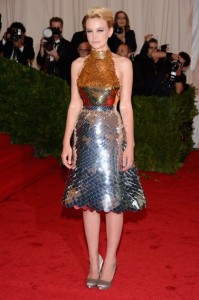 (Ally: Again, agree! Although that museum thingy looks sort of like an ovary. Although I’ve never seen one up close. Krista’s right smart like.)

I just like floral prints on black. It’s my jam. On Shailene, it’s youthful, but serious. Girly, but badass. The print has enough going on for my short-attention span. 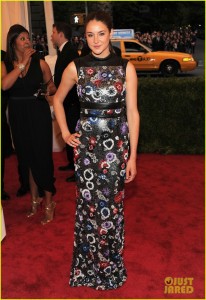 (Ally: Over the winter, Toddler G got the stomach flu in the middle of the night. He ended up getting sick all over the beautiful graphic patterned rug I had bought for his room at Home Depot. We had eaten lasagna for dinner that evening. With some blueberries for dessert. You see where I’m going here? I think lady found the rug we tossed out.)

So badass. I want to be her. Stop clutching your pearls, this is an event for the Costume Institute. 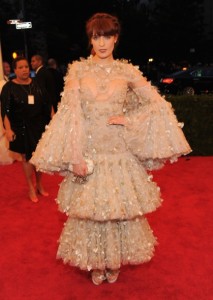 (L-A: I’m sorry. No. This will not do. And while my thoughts on the dress are completely biased by the disappointingly contrived Coachella set by Flo here, I’m not a fan of what she’s got going on).

I KNOW. I can’t believe I’m saying it either. Hear me out. I like the overall style, the length, and the beaded pattern. If the hem wasn’t such a clusterbleep, this could have been closer to #1. 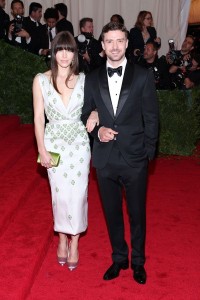 (Ally: Are we EVER going to get over shaggy bangs?)

It either needs to look see-through or be see through and not be able to see the “magic” protecting your modesty. I don’t get the point of Beyonce’s skin-coloured dress if you can see the non-matching skin-toned body suit. 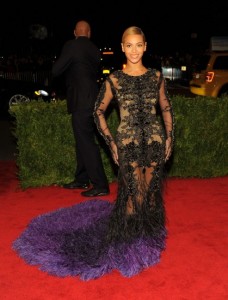 (Ally: I cannot tell you how disappointed I was with Bey. I haven’t been this disappointed since she came out with “If I were a Boy”. She’s been better dressed for recent Knick games with Jay.)

We get it, you’re edgy. Boring. 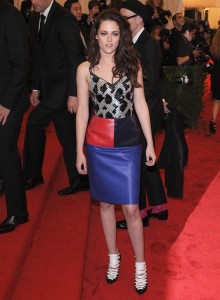 (Ally: This is the worst thing I have ever seen. Ever.  And I saw Valentine’s Day and New Year’s Eve both starring Ashton Kutcher. This hurts me more.)

We get it, you’re edgy because, otherwise, you’re boring. 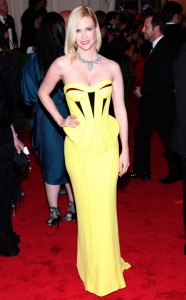 (L-A: I believe this is January reminding us that she is not actually fat. She’s also attempting to show us she can smile. and do more than a bitchface Nice try, JJ).

L-A: The real trouble with this event is there is too much to talk about. So many amazing dresses. So many crazy dresses (which I will focus on). So many unanswered questions, like: Who brought Renee Zellweger out of hiding? Why does Kristen Wiig look so cute on this red carpet, but not on others? Why did Marc Jacobs wear a sheer floor length lace button up? And what the hell is going on with Donatella Versace’s face? 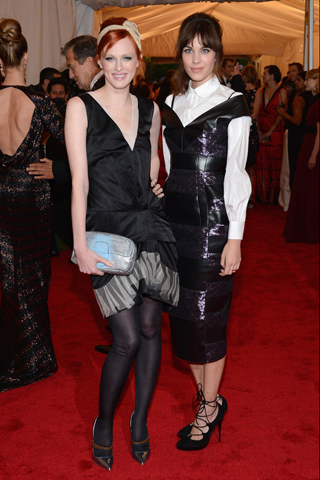 Not sure about the gloves, but I otherwise dig the chest armor. 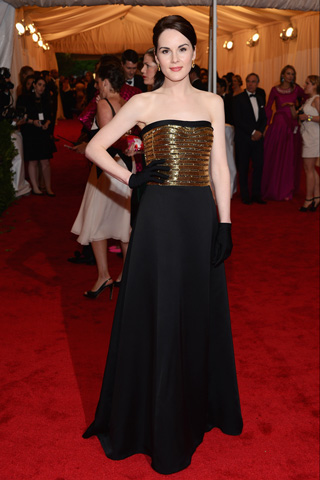 It is a costume institute, so I’m going to give Elizabeth Banks a pass for this. She’s not really channeling Effie (not enough jewel tones), but it is crazytown in the form of a dress. 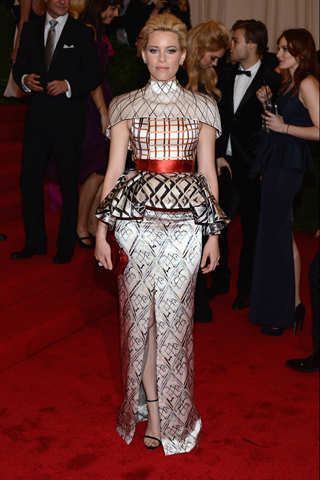 Mary Kate! What has happened to you?!?

I’m not a giant Olsen fan, but something really weird is going down with Mary Kate’s face. The dress from her own label isn’t doing her any favours either. 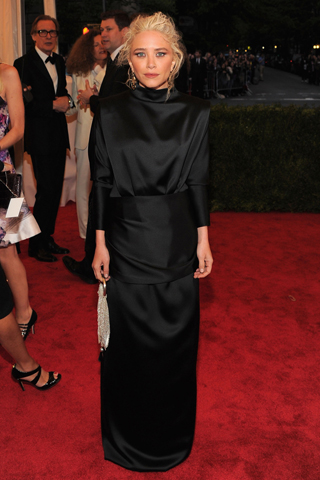 Lady, I don’t know who you are, but you frighten me. 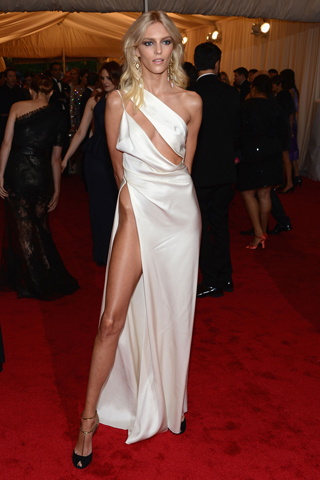 She needs to cover that up before she pokes a short man in the eye. Alber Elbaz is probably glad he wears glasses.

Emma Stone, you are too damn adorable.

I will probably watch Spiderman because she is that much adorable (as is Andrew Garfield. So that’s another reason to see a movie about a super hero I have no investment in). 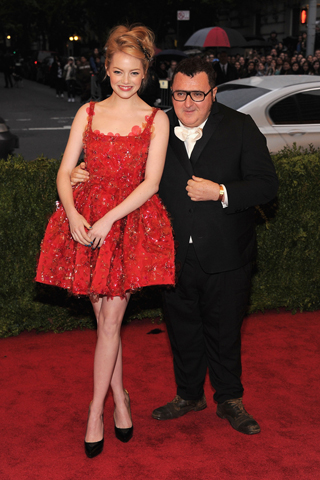 Literally. I think my hair hero has a cray fish on her dress. 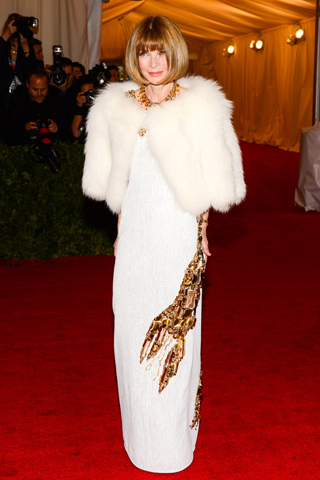 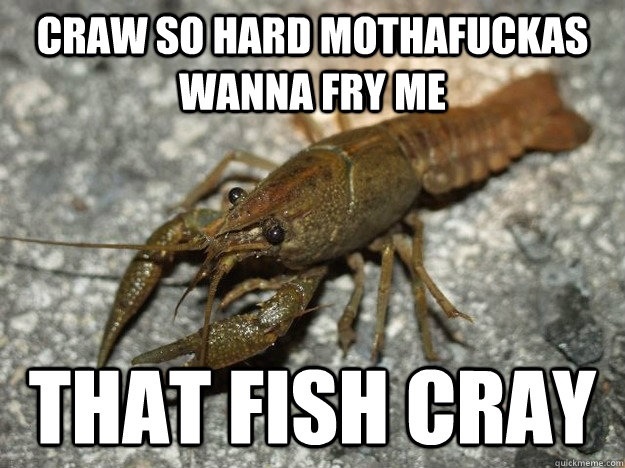 the inspiration behind Anna’s dress?

Why we were not invited to the Met Ball is beyond me but we’ll post about it anytheways
https://haligonia.ca/why-we-were-not-invited-to-the-met-ball-is-beyond-me-but-well-post-about-it-anytheways-59847/