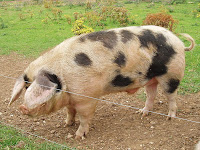 Bollinger Everyman Wodehouse Prize for Comic Fiction has announced this year’s shortlist of comic literature in honour of the work of P.G. Wodehouse. The winner receives sparkling wine from Bollinger, 52 volumes of the Everyman Library Wodehouse collection, and, perhaps most importantly, a Gloucestershire Old Spots pig is named after the winning book. (And for that reason alone, I hope that Snuff by Terry Pratchett is the winner).
Snuff (M)
by Terry Pratchett

“The new Discworld novel from the master features the popular Sam Vimes, Commander of the City Watch. According to the writer of the best-selling crime novel ever to have been published in the city of Ankh-Morpork, it is a truth universally acknowledged that a policeman taking a holiday would barely have had time to open his suitcase before he finds his first corpse. And Commander Sam Vimes of the Ankh-Morpork City Watch is on holiday in the pleasant and innocent countryside, but not for him a mere body in the wardrobe. There are many, many bodies and an ancient crime more terrible than murder. He is out of his jurisdiction, out of his depth, out of bacon sandwiches, and occasionally snookered and out of his mind, but never out of guile. Where there is a crime there must be a finding, there must be a chase and there must be a punishment.They say that in the end all sins are forgiven. But not quite all.” publisher
Jude in London (M)
by Julian Gough

“Jude is a penniless Irish orphan, fighting blizzards, bankers and the laws of physics as he walks the length of England. He has not one, but two Quests: to find his True Love — last glimpsed in the hairy clutches of a monkey — and to uncover the Secret of his Origins.Within hours of arriving in London, Jude has floored the monkey, won the Turner Prize, battled The Thing, and killed the Poet Laureate. Before the day is out he will be seduced, shot at, kidnapped, and forced to discuss literature with a crowd of Guinness-guzzling authors.
But can he fulfill his destiny in the labyrinth of the city, with its ten million temptations?” publisher
The Woman Who Went to Bed for a Year (M)
by Sue Townsend

“The day her children leave home, Eva climbs into bed and stays there. She’s had enough – of her kids’ carelessness, her husband’s thoughtlessness and of the world’s general indifference. Though Eva’s refusal to behave like a dutiful wife and mother soon upsets everyone but she insists on staying in bed. And then the strangest things start to happen…” publisher
Capital (M)
by John Lanchester

“The internationally celebrated author of THE DEBT TO PLEASURE returns with this major, breakout novel – scathing and subversive, sharply witty and brilliantly observed as it follows the lives and fortunes of a group of people in London that becomes connected in unforeseen ways. Pepys Road: an ordinary street in the capital. Today, through each letterbox along this ordinary street drops a card with a simple message: We Want What You Have.” publisher

“Lots of husbands forget things: they forget that their wife had an important meeting that morning; they forget to pick up the dry cleaning; some of them even forget their wedding anniversary. But Vaughan has forgotten he even has a wife. Her name, her face, their history together, everything she has ever told him, everything he has said to her – it has all gone, mysteriously wiped in one catastrophic moment of memory loss. And now he has rediscovered her – only to find out that they are getting divorced. The Man Who Forgot His Wife is the funny, moving and poignant story of a man who has done just that. And who will try anything to turn back the clock and have one last chance to reclaim his life.” publisher