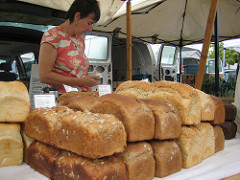 On a grey Saturday morning, with travel mugs perched in their cup holders, my friend Kristen of “with bite” drove highway 101 from Halifax to Wolfville. Valley girls, for the day.

Before passing by Domaine de Grand Pré and the beautiful Victorian homes just outside Wolfville, we made a pit stop at Just Us! Coffee Roasters for a re-fill. This coffee is my fav and there is always a bag in my cupboard.

The Wolfville Farmers’ Market is pretty easy to find. Just follow the smells, the live music or anybody carrying canvas shopping bags. 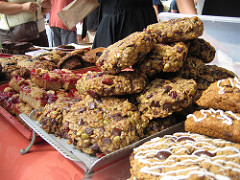 This is a market where fresh produce doesn’t have to travel far. It is, after all, the Annapolis Valley, where those apples were picked in an orchard just down the road.

Last week, the Info Booth’s featured item of the week was fennel. Fennel was just starting it’s first week in season and samples of fresh fennel vichyssoise were available to taste. You could pick up a copy of fennel recipes with an ingredient checklist of items available right there at the market. Clever thinking. 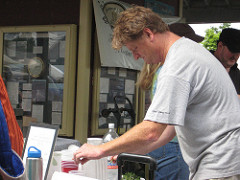 After chowing down in one of the yummy cookies pictured above, Kristen and I watched Chef Michael Howell prepare a fabulous drink called Raspberry Lime Rickey (lime simple syrup, raspberry puree and soda water). You see, raspberries were also in season and a u-pick had recently opened nearby.

I was on a quest to find lavender jelly (August 2008 blog post) since I was down to my last teaspoon but was told the ladies weren’t there that week. Kristen started her Christmas shopping at a jewelery booth.

Next, it was time for these two valley girls to find a strawberry u-pick. That blog post is coming up next.

About Wolfville:
Wolfville is the first fair trade town in Canada. The town is separated from the Minas Basin (part of the Bay of Fundy) by agricultural dykes which were built by Acadians in the 17th century. Wolfville Harbour is the smallest harbour in the world. It’s the home of Acadia University. Go Axemen! (That was tough for me to type because I went to St. F.X.)