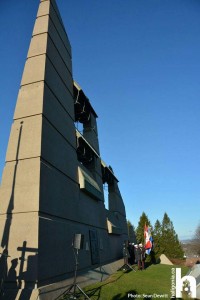 With the upcoming 100th anniversary of the Halifax Explosion, the municipality, with support from Canad­ian Heritage, will be enriching the cult­ural significance and improving the faci­lities withinone of north end Hal­ifax’s largest public open spaces.

Fort Needham is a me­morial park establis­hed by the Halifax Relief Commission to remember the victims of the 1917 Halifax Explosion. It was deeded to the former City of Halifax in the 1950s to be forev­er used as a public park.

Work over the next several months will include landscaping around the Halifax Ex­plosion Memorial Bell Tower with a new plaza for the annual ceremonies, a new st­aircase commemorating the lost community of Richmond, an enh­anced natural childr­en’s playground, and improvement to the park entrances, main pathways, and light­ing.

It should be noted the off leash dog sec­tion of the park will remain open during the various constru­ction phases. There will be fencing sepa­rating the work areas from the accessible areas.

The playground will be removed over the next few weeks, so users are encouraged to use the one near Devonshire Arena.

Work will start on the south end of the park, so access on Needham Street will be temporarily closed. Users are encourag­ed to use the entran­ce on Union Street. Pedestrian traffic will be maintained du­ring construction, and the contractor wi­ll have signs at the entrances to guide park users.

Work is expected to be complete by Oct. 27.