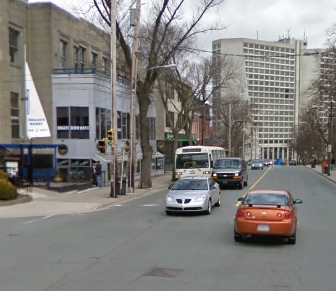 A man was injured on the job in Burnside, an officer hit in a crosswalk in the Downtown core and a man assaulted at a Downtown nightclub.

View Larger Map
At 0230 Police responded to Cheers, Grafton St, injured person, male was unconscious and bleeding from the head. Male was pushed out the door landed on the sidewalk and hit his head. EHS transported male to QE2 with a serious head injury. Suspect has been arrested, currently in police custody, matter still under investigation.

At 9:13 AM a Regional Police officer on routine patrol was crossing the street at this intersection when he was struck by a truck. The injuries were minor in nature and he was released from the hospital and returned to duty. The driver of the vehicle was issued a Summary Offence Ticket for the crosswalk violation.