[The great thing about these East Coast Guest Posts is that sometimes I get introduced to a topic that I might otherwise not read about. Like this next one, courtesy of the prolific and always entertaining @MrWordsWorth on Twitter.] 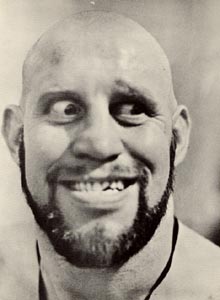 Take my hand, fair reader, and I will lead you back into a dim and distant past. A time when Nova Scotians had two non-cable TV channels to choose from, three if you were fluent in French. A time when one of those stations gave over one hour of precious broadcast time each week to something called Atlantic Grand Prix Wrestling. If you’re sitting comfortably, I’d like to tell you how it broke my heart.

Though my mind is rather enfeebled due to advanced age, my memories of Atlantic Grand Prix Wrestling (AGPW) are relatively strong. It was a cavalcade of inappropriate racial and cultural stereotypes. There was Killer Karl Krupp, with his monocle, fetish boots, riding crop and his signature move, The Claw. There was the Cuban Assassin, who looked like Fidel gone feral. Oh, it also had an awesome theme song: Let There Be Drums by the Incredible Bongo Band.

My friends and I loved AGPW. In fact, we used to pretend we were AGPW stars and stage our own fights. I always chose Leaping Lanny, a handsome, moustachioed lad in an oversized black bikini. Our tussles were pretty much bereft of homoerotic undertones, at least as I recall, and we made our own stage blood by smushing berries on each other. Halcyon days.

One summer, my dad took my brother and me to see AGPW live at the Halifax Forum. I was excited. For weeks, AGPW had been pimping what my young mind believed was the battle of a lifetime: Leaping Lanny was going to take on, I think, the Macho Man for the champ-een-chip belt. Determined that could not miss out on all the chair wielding, head bustimiacating glory that would surely ensue, my dad relented to our needling to save his sanity.

Way up in the nosebleed bleachers of the Halifax Forum, I was witness to an event that became a bifurcating moment in my life. A moment when every thing I held dear was corrupted, and I developed a hard, non-chocolaty shell to house my new deep-rooted cynicism about everything and everyone. The match ended with a non-decision. All that hoopla was empty hype. And I was an all-day sucker for buying into it.

So there you have it. Not much, huh? You probably guessed that I don’t watch wrestling anymore. And I’ve never encountered any of my fallen idols ever in my travels. If I did, I suspect I’d approach them cautiously. Maybe ask for an autograph, just for old time sake. Then, I’d smush berries in their faces, administer The Claw and throw my arms up in the air victorious, oblivious to the ensuing body slam that would send me into the loving arms of unconsciousness. Cue Let There Be Drums, and fade to black.

Mark Campbell is a creative writer, at least that’s what he tells people. Mark writes marketing communications materials to pay the bills, and poems and absurdity to mess with your mind. Mark wishes he could sing like Al Green, and he has an unfortunate habit of speaking in the third-person.

Wrestling with the Past
https://haligonia.ca/wrestling-with-the-past-12121/