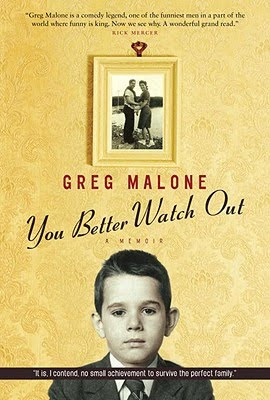 Greg Malone has written an engaging and touching account of growing up in St. John’s in the 1950’s.

Best known for his work with the comedy troupe CODCO, Malone proves himself to be an insightful storyteller in You Better Watch Out: A Memoir.

He has the unique ability to remember childhood with all its joys, painful moments and humiliations. The stories are told consistently from the point of view of a child. The narrative is not interrupted by adult perspective. Every experience has the intense importance you feel in childhood. The tragedy of receiving the wrong present at
Christmas and guilt over the ingratitude; the joy of recognizing those moments when you are certain you are valued by your parents.
He (of a mixed religious heritage) grew up in a time when St. John’s was strongly polarized Catholic Protestant. Education of the mind, soul and body was controlled by the sometimes fierce and often baffling Christian Brothers. And he names names. We expect to hear about his early friendship with Andy Jones, but Danny Williams, too?
There is an early dissonance between desire for play acting and dressing up and his parent’s desire for him to behave like other boys. One of my favourite passages:
– One day while Barbara Lynn and I were playing, Jimmy threatened to beat us up if we didn’t let him play too.
“Okay, come on, Jimmy. You can be the son. I’ll be the father.”
“I don’t want to be the son. I want to be the father.”
“Okay, you be the father, and you have to go to work.”
“Where do I work?”
“On the verandah. That’s your office.”
“I don’t want to work. I want to stay here. I want to have a gun.”
“No, Jimmy. It’s not that kind of game.”
“I don’t care. I’m having guns. Watch out. Bang. Bang.”It was impossible to keep house under such conditions. –
Malone, though the central character, oftentimes takes a back seat to his family. It is as much a family history as an autobiography. 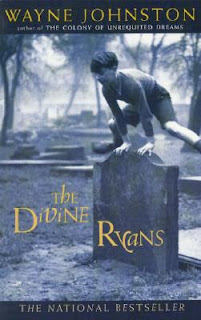 As I was reading this book, a couple of books
by Wayne Johnston kept coming to mind. The Divine Ryans and The Story of Bobby O’Malley are both set in Newfoundland in the latter half of the twentieth century and capture a moment in a boy’s young life. Although these are fictional stories, there is the same bewilderment a child often feels trying to make sense of an adult world.
Too Close to the Falls by Catherine Gildiner tells the story of a precocious child whose parents employ her to work in their drugstore in order to channel some of her excess energy. She befriends their delivery driver and together they have adventures. Again, a story told from the enthusiastic and innocent perspective of a child.

If you look closely at the childhood of a successful comedian, you are sure to find, as with Malone, in addition to insightfulness, a sharp sense that they are different from those around them.

In a different part of the world, there is Mishna Woolf, author of I’m Down: A Memoir. Born to white parents, Mishna (now a humourist and a model) is raised by a father who wishes he was black. She comes to find that she is not truly at home in either world, black or white. The story is peppered with hilarious anecdotes and is ultimately bittersweet.

You Better Watch Out: A Memoir by Greg Malone
https://haligonia.ca/you-better-watch-out-a-memoir-by-greg-malone-98437/