Some friends and I have recently started sharing meals and cooking for each other once a week. I have lovingly bestowed the name “Yuppie Supper Club” on this venture because it ends up being a ridiculous meal that ends in bellies full of delicious ingredients. On this particular occasion, I was the host. I was dealing with two ends of the spectrum- a friend who would eat anything, and one who refused to eat seafood (!) and who didn’t enjoy the combination of sweet and savory (!!!!) And ya’ll know how I love sweet and savory!

I started the night with little unconventional appy pizzas. Instead of the typical pizza crust, I used naan bread, slathered with creamy goat cheese, topped with meaty sundried tomatoes and generously drizzled with olive oil, cracked black pepper and hot chili flakes. Then, I put the ZAs under the broiler until the cheese was just slightly melted and even creamier. 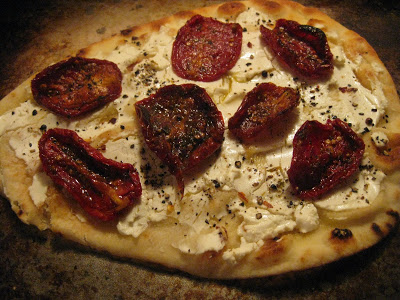 I also made a potato pave of thinly sliced potatoes, tossed in melted butter, S&P and layered in a well-greased pan and baked at 350 until golden, about 25 minutes. 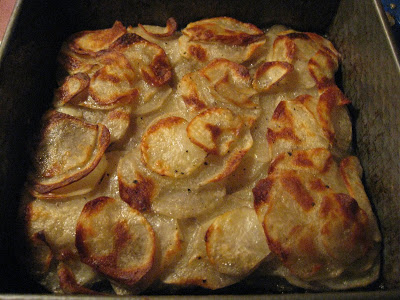 The main event contained the potato, steamed asparagus and chicken breasts on the bone – the only way to make them in my opinion – with a creamy oyster and portabello mushroom sauce. 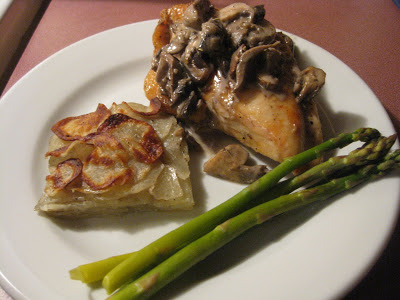 The basics are pretty self explanatory; steam veg, rost chicken.

Saute mushrooms in butter until tender over medium heat. Add cream and reduce to low until thickened, and pour over chicken. See? Simps!