Six months have passed since I left the fine Republic of Korea, and last night, for the very first time, I made a homemade Korean dish. As I alluded to in an earlier post, it’s something I’ve been intentionally waiting to do, but ever since I discovered bottled kimchi at my local Asian grocer (Tian Phat), I’ve been dying to try making Korean food at home.

As it happens, the Korean cookbook I bought right before leaving Seoul doesn’t have a recipe for one of my favourite dishes: Kimchi fried rice (otherwise known as kimchi bokkeumbap, or even more so as 김치 볶음밥). I suspect, now that I’ve made it, that the absence of this recipe can be attributed to the fact that it’s so easy to make. Alas, the cookbook will have to wait for another night, and another cooking adventure.

So where does any new dish in the kitchen begin, if not from a cookbook or your imagination? On Google, of course, and subsequently, on Blogger. I found a very straightforward recipe on the blog of cookbook author Bee Yinn Low. The pictures and recipe looked and sounded exactly like the kimchi bokkeumbap I used to eat in Seoul, so I figured it was a good recipe to start with, even if it wasn’t directly from a Korean website or source. Given that this recipe only serves one, however, and that I’m a fiend for kimchi, garlic, and sesame oil, I did end up adjusting the recipe to feed two, as well as to suit my individual taste buds. 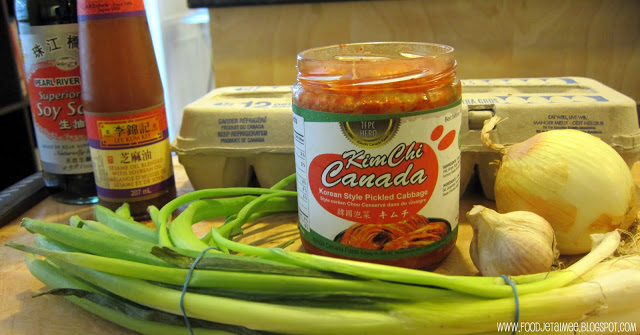 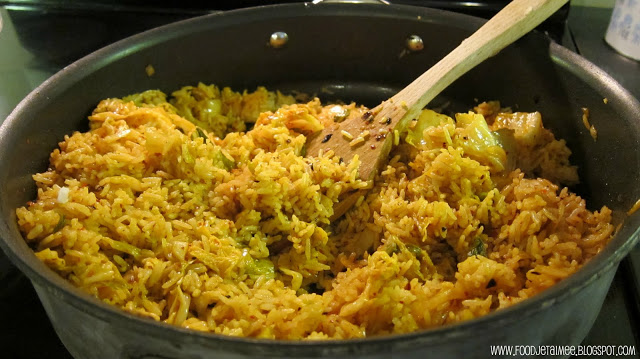 1. Pre-heat two pans: a wok (or a large, deep frying pan) for the fried rice and a frying pan for the eggs.
2. Add oil to the wok and sauté the garlic and onion until aromatic. Add the kimchi and stir briefly before adding the rice. Combine well. Add the kimchi juice, soy sauce, sesame oil, black pepper, and scallions to the wok. Fold together until well blended with the rice.
3. Meanwhile, in the frying pan, add oil and fry the eggs sunny side up. Slide out of the pan and set aside.
4. Dish rice out and serve immediately with the egg on top of the rice.
—

I can’t even begin to tell you how happy and nostalgic I was eating this last night (hence all the glamour shots!). Now that I know how easy it is – and as I later announced to F. – we’ll likely be eating this at least once a week, from now until the end of time.

As I was eating my bokkeumbap, however, I remembered a few touches that were missing, like a sprinkling of sesame seeds and shredded kim (dried seaweed) over the top. I’d probably have added even more kimchi, too, if I had any left. I’ve also heard of making this dish with pork, bacon, or fried in pork fat.

Anyone have some family secrets, tips, or recipes they can share with me to make my bokkeumbap even better next time?

Finally, a confession: I spied a pouch of kimchi spice mix at Tian Phat for making homemade kimchi. It even had a recipe on the back! In my excitement, I bought it, but what was I thinking? Am I really going to make kimchi at home? If I did, then I could really say my kimchi fried rice was homemade! Anyone selling kimchi fridges in Halifax, or a couple of giant, clay pots I can bury in the backyard?

F. doesn’t know what he’s gotten himself into. Poor guy.