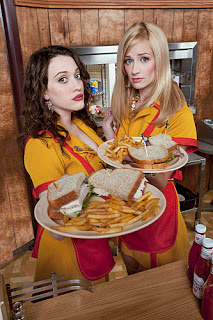 Is it too soon to break up with 2 Broke Girls? Yes, it is. I promised I’d give it five episodes. But y’all? This show is not very good.

In this week’s episode they managed to tone down the Caroline character quite a bit, and I actually found her rather endearing and funny. Instead it was Max who made me cringe, and that’s really too bad since I like Kat Dennings. But her character is just too negative to root for. It’s possible to be sarcastic and not be a total B, but the writers don’t even seem to be trying to find a balance for Max. She’s just rude, cruel and angry. Caroline might be overbearing and naive, but at least she means well. At least she’s trying to do something for the two girls – for example, why did Max freak out over having her name on the specials board and blow off a possible business contact? There was no real motivation for that, other than Max being a generally awful person. If Max showed any kind of interest in wanting to be friends with Caroline and wanting to pursue the cupcake business, her jokes would come across as much funnier and less cruel.

The show also really needs to work on developing the minor characters. Right now they’re just a bunch of stereotypes (often racial ones) that make me uncomfortable.

I’ll give this show a few more episodes because I said I would, but I’m not sure it’ll pay off. In the meantime, be sure to check out You Know You Love Fashion later this week, I’ll be writing a post on 2 Broke Girls and New Girl – let’s hope the latter delivers.

2 Broke Girls: Breaking Up is Hard to Do
https://haligonia.ca/2-broke-girls-breaking-up-is-hard-to-do-44203/